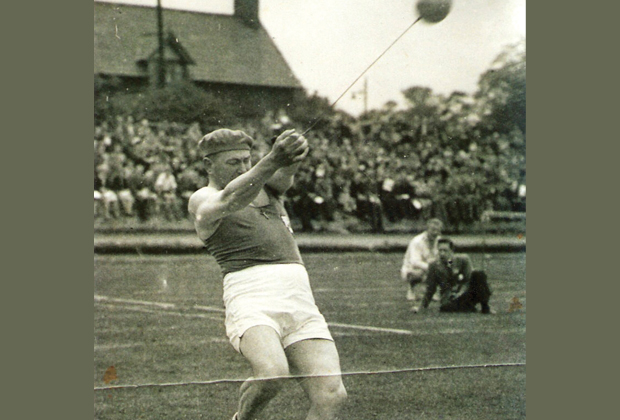 A museum in County Louth is asking Berlin museums to clear out their attics in search of old film footage of Irish hammer-throwers that was gathered for Hitler ahead of the 1936 Olympic Games in Berlin.

In the 1930s, Irish hammer-throwers excelled at their sport to such a degree that Hitler sent a film crew to Ireland to find out just what made them so good. His plan was to make the German team the best at the macho sport to propel his notion of the Aryan race’s physical superiority.

Brian Walsh, the curator of the County Museum in Dundalk, Ireland, is looking to recover the footage for an exhibition this summer coinciding with the London 2012 Olympics. According to Walsh, Hitler arranged to have the athletes filmed so that their training regime could be analysed.

“We heard about this film in our contact with some of the Olympians’ families and are trying to locate the footage,” he said. “So far our efforts in Ireland have been fruitless, so if it’s anywhere, it will be in Berlin. If anyone could help us with this, it would be fantastic to include in the exhibition.”

Walsh knows that finding the footage may be tough, but he’s not giving up hope. “The aftermath of World War II, the arrival of the Soviets into Berlin and the simple fact that [the footage] is over 70 years old makes it a long shot, but someone might know something about it. We understand that it was not just the Irish hammer-throwers that Hitler was interested in.”

The 1936 Olympics were a showcase for the recently elected Hitler to put forward his racial ideology. Arnulf Scriba from the German Historical Museum in Berlin contends that Hitler was not concerned with the games themselves but in what winning physical competitions meant for his ideals. “Hitler was not interested in sport at all. Sport was just a vehicle for him to show how the Aryan race was physically superior.”

“The Olympics were a perfect vehicle for Hitler,” concurred Walsh, “and he knew exactly what he was going to do. Everything was done for a reason, and it turned out to be a very sinister reason.”

In fact, Hitler initially didn’t even want to host the Olympics. He was persuaded by Propaganda Minister Joseph Goebbels that the festivities could be exploited to advance the Nazi cause and bring much-needed foreign cash into the country.

Ironically, the choice to have Germany host the Olympics was intended to signal the country’s return to the world community after defeat in World War I. In actuality, Hitler began to see the Berlin Games as an advertisement for the Germany he was creating, and they became one of the biggest propaganda exercises in history.

The president of Germany’s Olympic Committee, Dr. Theodor Lewald, was ousted from the position after it was revealed his paternal grandmother was Jewish. He was replaced by high-ranking SA man Hans von Tschammer und Osten, who established an Aryans-only policy in selecting Germany’s Olympic competitors. Even though many Jews were world-class athletes, they were not allowed to compete.

“By this time Jewish athletes had been banned from city playgrounds and all sports facilities. There were international calls to boycott the Berlin Games, so to hush them up, the Nazis let just two German Jews compete,” said Walsh.

The Nazi administration spent 42 million reichsmarks building Berlin’s still-impressive Olympic Stadium, which was also the location for the World Cup final 70 years later in 2006. The most memorable achievement was that of black American Jesse Owens, who won four gold medals. Ultimately, however, Germany was the overall biggest medal winner. The popular success of Owens allowed the Nazis to claim that their policies had no racial element.

After 1936 there would be no Olympic Games for a dozen years. The 1940 Games scheduled for Tokyo and the 1944 Games were both cancelled. Instead of competing with each other on sports fields, much of the world’s youth were killing each other on battlefields in a new world war – one that Hitler had already been planning in 1936.