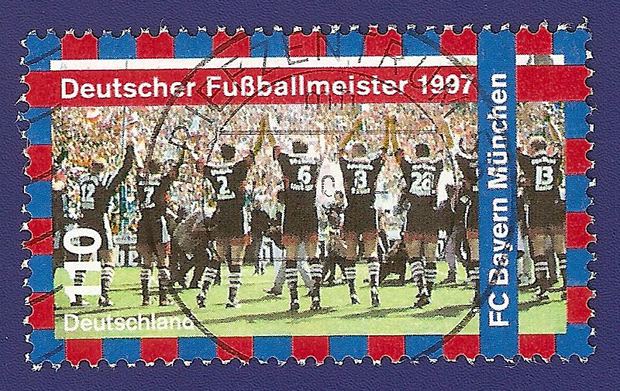 The cat is in a mood, he has been for hours. Cute little paws, padded and dappled with white socks, stomp malevolently around the flat. He won’t let me sleep so I get up and he cuts my unprepared ankles to ribbons. I hate him when he’s like this, but then he gets pissed off sometimes, we all do. It is the football. Like me he is a contrary bastard and like his fellow Berliners he delights in the story of an underdog. Therefore he is confused, conflicted as to how he should feel in the wake of Bayern’s 24th title win last night after their 3-1 humping of a hopelessly brave (as in, last night, they really had no hope) but flawed Hertha BSC.

He likes the idea of revelling in it because everyone else hates them, but he hates the serial-winners because of their, well, serial winning.

I tried to explain to him that sides like this don’t come along very often. Just watch them, I say. The grace of movement and the mastery over that ball, the way that their opponents – all their opponents – freeze in the face of their onslaught, like rabbits in headlights or a man cub in the glare of hypnotic stare of Kaa the python from The Jungle Book. Bayern play football like little girls play with the strings of their fathers’ hearts. It is too easy, they make metronomes sound sluggish. They are always on time, not because they are supercilious southerners, but because they got rhythm.

Imagine playing against them. To loosely paraphrase Philip Larkin, they fuck you up your mia san mia.

And yet FC Bayern aren’t cherished in any guise by most, especially here in Berlin. Which is a shame, because one would think that we could identify with a land whose money, once upon a time, got pissed away by a charismatic demagogue on unnecessary castles (though Ludwig never started an airport to be fair). They are simply the juggernaut with the crooked boss and the biggest sponsors in the land which simply enables them to hoover up the talented youth of the country. They are the club that the Bundesliga mostly gave against playing this season.

I try and sit the cat down, show him Thiago’s bicycle kick against Stuttgart from earlier this year. There is a stereotype about Bayern called the Bayern-Dusel that means that they will somehow contrive the jammiest wins out of nowhere, but this last minute winner wasn’t lucky. It was a moment of searing, devastating beauty and of gravity defying, technically perfect, willpower. He is still not impressed.

But I love watching Bayern at the moment, it is the contrarian in me. The rules of the new football are that we boast about watching our crappy teams losing in the rain in unmentionable, far flung places, on rutted pitches a thousand miles away from home, and even further from the exalted reaches of the top class. We are, somehow, better football fans because of this. To enjoy the best players in the world playing at the highest possible, nosebleed levels is to sell out, is to support Media Spree and to build a car park over Tempelhof.

And there is something about this attitude that stinks. I watch football because I enjoy football and not because it makes me cool. I enjoy the Champions League as much as I enjoy the Landesliga because the two are not mutually exclusive. The cat, though – as Berlin as he is – disagrees. He twitches his nose implying that I am just another glory hunter, filling the coffers of modern football and participating in the taking away of the people’s game from the people. He turns away and his eyes dart with the waking dreams of chasing mice and of FC Internationale playing in the Berlinliga next year with their principles intact and the glory being for its own sake and not for that of Mercedes and of tax dodging southerners who always seem to win.

In the end we agree to differ and wonder if Hertha will pull out of their slump against their biggest enemies, FC Schalke 04, next week or if Union will win the Ostderby against a railing Cottbus on Monday night. He says he wants Tasmania to win the Berlin Cup because at least it won’t be BFC or BAK again.

But I don’t really mind, he brings out the worst in me. As long as they play some decent football, then I’ll be happy.