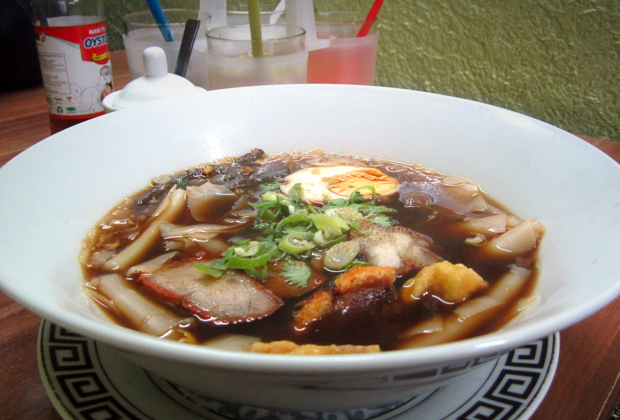 When I was in Thailand, a day trip to Laos followed by a night train to Bangkok turned into a 60-hour comedy of errors involving bedbugs, the Germans winning the World Cup, a Buddhist holiday, a Dutch-Argentinian lawyer prone to panic attacks, and absolutely zero sleep. By the time I’d made it to my AirBnB and fumigated my backpack I was basically a walking corpse. But I also hadn’t eaten all day, so I headed out to find the nearest “food street”.

I ended up with a stand that served kuay jap, a peppery soup filled with various and sundry pork bits and distinctive scroll-shaped noodles. I’ll grant you, anything I ate at that point probably would’ve tasted miraculous, but the memory of that particular dish is one I’ll take with me to my grave. This was the soup of life, of resuscitation. It didn’t make me quite as happy as the 12 hours of sleep that followed, but it came damn close.

The other day, seeking to recapture that same feeling after what I think we can all agree was a flat-out shitty week, I headed to Sakorn Thai in Charlottenburg. Like nearly every other decent Thai joint in Berlin, Sakorn is owned by a woman from the Isan province, in this case a town near Korat. It’s already one of my favourite places to eat Thai noodles here because they usually bother to get the texture right; the flat, wide rice bands in a bowl of yen ta fo I had on a previous visit were as al dente as any proper Italian tagliatelle. This time around, I discovered that since New Year’s they’ve started giving out a real, laminated menu instead of relying on pictures by the counter, and they’ve sadly upped their prices from €5 per dish to around €6. The good news is that now non-Thai customers have easy access to what used to be off-menu Isan specialities like larb and nam tok, and the food’s still among the least Germanified you can get in Berlin on these Thai Park-less winter days.

Including that bowl of kuay jap (€6), which actually contained more pig offal than the version I’d had in Thailand, mostly liver and tendon but also something minerally and gelatinous I couldn’t quite identify – lung, maybe? Not for the unadventurous, in any case, but pretty great if you like your food to have as many different textures as possible. The real star of the dish, though, was the sliced deep-fried pork belly, which somehow stayed crispy even when soaked in broth. (Plus half a hard-boiled egg and some fried tofu, y’know, to keep things healthy.)

Did it live up to that magical life-restoring moment in Sukhumvit? How could it have? The rolled noodles, while tasty, were uncharacteristically too soft and the broth a bit too sweet (although a dose of chillies and fish sauce quickly ameliorated the latter). Still, I’m not gonna be too hard on it because a) the fact that a dish like this even exists here is amazing in and of itself, and b) that pork belly! Next time, I’ll order it straight-up stir-fried with Chinese broccoli as kanah muh krob (€6.50) or with barbecued pork and sausage in Sakorn’s signature dish, the meat-stravaganza khao mhu daeng (€6). It may speed me a little further to my death instead of bringing me back to life, but that’s a trade-off I’m willing to make.