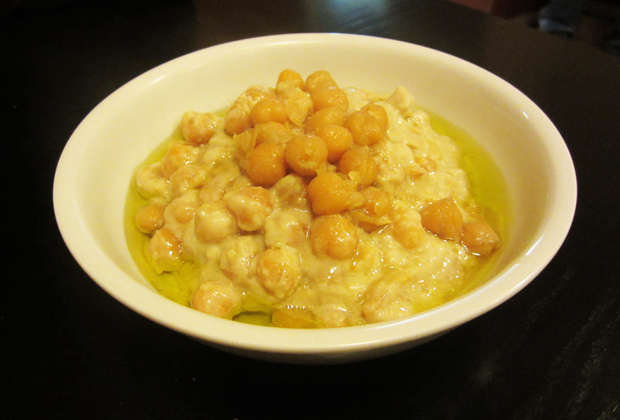 Here’s a thing nobody has ever said in the history of the universe: “You know what I really hate? Hummus.”

I can’t think of a less offensive foodstuff than that humble chickpea-tahini-garlic-olive oil-lemon blend. It’s cheap, it doesn’t have any weird ingredients, it’s not too spicy, it’s infinitely customisable, it can be eaten on or with basically anything, it’s versatile enough for a light snack or a full meal. It’s vegan, for fuck’s sake, but not in an obnoxious holier-than-thou way.

So, and speaking of holy: it’s pretty damn ironic that the food equivalent of Zack Morris from Saved By the Bell has its roots in the world’s most troubled region. Tussles involving hummus seem to arise every few years, neatly coinciding with spikes in the Israeli-Palestinian conflict. While Lebanon’s made the most aggressive claims to the dish, even campaigning to give it a national designation a la Champagne, the Israelis are the ones smearing it on their faces whilst proclaiming “Hummus, not Hamas!” in a less sanitary answer to the Ice Bucket Challenge.

But hummus has also historically acted as a common point of agreement between Middle Eastern nationalities, with soldiers on either side sneaking behind battle lines to enjoy a good wipe. Here in Berlin, the dip is what unites Neukölln’s longtime Arab population with the young Israeli expats who’ve been flooding in recently. When hungry for a taste of home, all flock to Sonnenallee’s Schwarma Row, aka Little Beirut: that clump of Arabic establishments between Pannierstraße and Fuldastraße.

The busiest of them all is Azzam, an oft-blogged frequent contender for the “Berlin’s Best Hummus” title, though what people really mean when they say “hummus” is actually musabaha, a mixture of chickpeas in blended, mashed and whole form. €3.50 gets you a king-sized portion, mixed with careful consideration in a metal bowl with a wooden pestle and served with a multitude of pitas and a plate of pickles, tomato slices, olives and mint that could almost be a salad.

But Azzam tends to get too packed for its own good, and so if you find yourself in the area before evening-time you’d do well to seek out one of its Sonnenallee competitors: Al Pasha and Akroum Snack, both holes-in-the-wall with early hours and limited, legume-based menus.

I tried the former just yesterday, looking for some brunchy salvation post-Torstraßen Festival. Like most of the restaurants in the area, Akroum’s a no-frills joint with the ambiance of a hospital waiting room, set apart by the smell of baking flatbread and the bright yellow menu inexplicably decorated with pictures of fish. The drinks list on said menu is longer than the food one: there’s only musabaha (€3.50), foul (hummus’ fava-bean-based sibling, €3.50) and fatteh (a chickpea-yoghurt-fried-pita concoction that joins Slushies and Saltines on the list of foods whose names are also adjectives describing them, €4).

You’ll see at least one of those on every table along with the aforementioned flatbread (“Arabic Pizza”, €1.25), which you get fresh out the oven topped with meat or cheese or za’aatar (“Thymian”). It’s that last one, the tangy-crunchy thyme-sumac-sesame spice blend, that you want, both to stay on the vegan trip and because it’s great dunked in a bowlful of Akroum’s soft, creamy musabaha, which maybe lacks the complexity of Azzam’s version but is somehow more comforting, especially after a night of one too many Original Long Drinks (seriously, guys… is it just me, or is Finland trying to kill us?).

Add in the ubiquitous veggie platter and a mini-Tasse of free tea for a brunch that’s good enough to please Jews, Muslims and Christians; Israelis and Palestinians; hipsters and haters; Mossy Brackets and her estranged fuckbuddy-turned-flatmate. Berliners, if you’ve got a sworn enemy, bring him or her down to Sonnenallee one of these days and let this warm, chunky, chickpea-filled salve heal the rift between you.