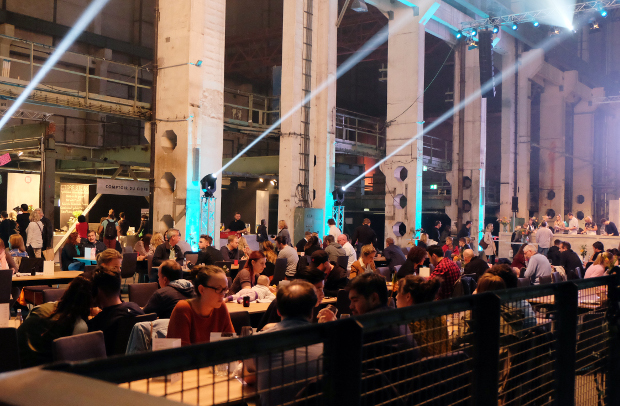 I’m approaching my five-year Berlinniversary (this is a thing, but not so much of a thing that there is an established spelling of it), and that’s always an occasion to marvel at how much the city has changed in the past half-decade. Like: when I first arrived, flatshares under €300 were not a Moby Dickian occurrence, everyone had to pretend they’d been to Bar25 and none of your friends lived in Wedding. But some of Berlin’s biggest changes have happened in the food scene.

For one: there is a “food scene”. Back in 2011, Markthalle IX was a dusty Kreuzberg dinosaur that housed an Aldi and not much else. Street food was limited to döner and currywurst (with the exception of a short-lived, hella-ahead-of-its-time Californian taco truck). Thai Park hadn’t yet been Columbused, and veganism was still for anarchist WGs.

To see how far the “scene” has come and where it might be going, all I had to do was wander around the past weekend’s huge food events: Markthalle IX’s Stadt Land Food street festival and Kraftwerk’s House of Food expo (part of the greater Berlin Food Week). The first represented, let’s say, the more Brooklynified aspects of Berlin foodie-ism: bearded craft brewers by the dozens, fermentation workshops and So. Many. Things. In. Jars. The second represented its corporate side, with the city’s big food delivery companies handing out Gutscheine alongside international vodka brands and copious samples of Berlin’s trendiest snacks (Paleo Jerky, anyone?)

Here’s what I took away from it all:

Meat’s back, maybe: With stations dedicated to Wurst, cheese, seafood and honey, Stadt Land Food seemed to want to reassure us that it’s totally okay to eat animals as long as they were relatively happy in life and not the last of their species or anything. No-longer-newbies Kumpel & Keule were slinging their sausage seemingly everywhere; it’s good stuff, but did we really need a butchering demo right by the Markthalle’s entrance?

Can we start eating fish again? One of the best offers at either fest was an adorable little Knurrhahn (sea robin) fileted in front of my eyes and cooked on Küstlichkeiten’s grill at Stadt Land Food. This was part of the Dutch sustainable fish sellers’ promotion of “bycatch” – accidentally caught undersized/undesirable species that would otherwise go to waste. Pretty delicious and guilt-free, until you realise that bycatch is itself the product of unsustainable fishing practices and would be eliminated altogether in a perfect world.

Superfoods are here to stay: At House of Food, I saw vendors hawking the expected quinoa crisps, bone broth (ugh, still!), acai smoothies and coconut water, along with the newest addition to the antioxidant pantheon: kelp! Fun fact: if you eat a plate of kelp tagliatelle prepared with kelp pesto, you will not die of cancer. Instead, you’ll die from legions of Italian nonnas rising from their graves to rip your guts out.

Freekeh is the new quinoa: And speaking of superfoods, thanks to Stadt Land Food’s rather aggressive “Get Freekeh!” campaign, don’t be surprised if you see a certain hilariously named Palestinian wheat derivative on a whole lot more Berlin food menus in the coming months.

Liquor? I hardly know her: A pretty huge portion of the House Of Food floor was dedicated to spirits. There were a few fringe tipples, like a pretty decent new espresso distillate and something made with pistachio tree resin, but the big ones are still gin and mescal, so if you were waiting for Berlin’s fashionable cocktails to stop tasting like smoke and/or pine needles you’re out of luck. Vermouth seems to be on the way up, but given the middling success of Campari’s recent hearts-and-minds campaign here, I’m starting to think aperitifs just aren’t gonna catch on in Berlin. It’s called Feierabendbier for a reason.

About that class problem: Despite Stadt Land Food’s stabs at inclusiveness (a “Conflict Food Cage”, really? And I’m still not sure I’m on board with segregating all the Middle Eastern street food vendors into “Souk Berlin”) the crowd at both events seemed to exclusively comprise trust fund hipsters, start-uppers and Öko-Spießer types – maybe because all the actual food on sale was really, really expensive. Stadt Land Food was put on in cooperation with the newly formed Gemeinschaft für gute deutsche Esskultur, headed by chefs from Ernst, Horvath, Nobelhart & Schmutzig and Einsunternull, aka four of the priciest restaurants in town. So does “good German food culture” have to cost €100 a head? Can’t we treat local fruit, veg, cheese and sausage like what it is – a means of basic sustenance – rather than these precious artisanal jewels?

And here’s where I’m gonna backtrack and say that food in Berlin hasn’t actually changed that much in the past five years. While the circle of elites, artisans and bloggers (ahem) may have increased its sphere of influence, it still remains a rarefied sliver of society. Give or take a recent vegan convert or two, most Berliners I know are eating basically the same way they did in 2011 – buying veggies from discounters and the Maybachufer market, going organic when they can afford it, occasionally “splurging” on a €10-15 dinner at a Vietnamese-owned sushi restaurant. Eating is the new clubbing, as they say… in that both of those Berlin scenes vastly overstate their own importance.