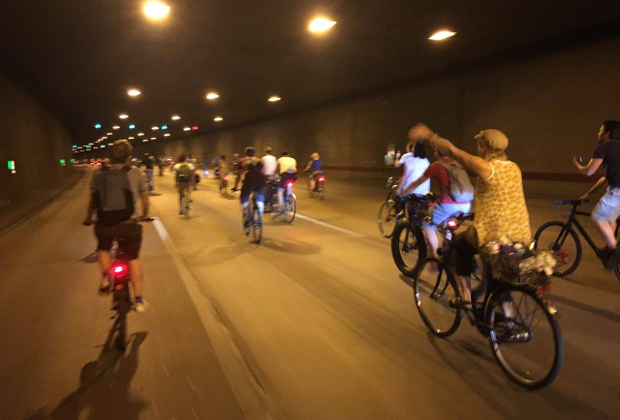 “How long is this going to take?” the man asked the cop after stepping out of his car. He sounded on the brink of emotional collapse. “I don’t know,” the cop answered. “Maybe two, maybe six hours.”

Hundreds of cars were stuck in traffic long enough to finish Hamlet on audiobook – drivers were sitting on the ground next to their cars. The cause? Me – and about 100,000 other cyclists who had shut 1000km of major streets throughout Berlin.

Last Sunday saw the Sternfahrt, a traditional bicycle demonstration by the General German Bicycle Association. This was their 41st ride, and the biggest such demonstration in the world. Organisers estimated there were 100,000 participants – maybe a shameless exaggeration (since who doesn’t like to round up numbers?), but I can confirm there were bikes as far as I could look.

I myself had never heard of this “ride to the stars” before. I joined spontaneously when I saw the masses going down Karl-Marx-Straße in Neukölln. After just a few hundred metres, we ran into endless two-wheeled congestion. There was a bottleneck to turn right onto the freeway tunnel, and we were scooting along for an hour.

“Bicycle Race” by Queen blasted out of a mobile sound system when we finally descended into the darkness of the A100 tunnel. It was bliss – and only got better when we came back up into the sunlight. We crested a hill at a very leisurely speed and glided past Tempelhofer Feld.

We abandoned the Autobahn in Schöneberg. But before we left, I got a view of thousands of motionless cars glaring at the sun. The Sternfahrt felt like taking back the city. Some of the participants were protesting for bike-friendly policies – others probably just wanted the chance to ride down the freeway.

I hate cars. They create noise and flith, take up space, and latently threaten to murder pedestrians and cyclists. It’s like a bunch of people decided that they can destroy the planet because they’re too good for public transport. The demonstration on Sunday gave me a feeling of how great cities will feel once we get rid of the automobile. I can’t wait.

The new red-red-green government in Berlin has promised lots of new bike lanes and other improvements. It being Berlin, I wouldn’t hold my breath hoping for this to happen soon. But even if we don’t get more bike lanes, that view of those spiteful drivers trapped in their death machines will keep me happy for the whole year.