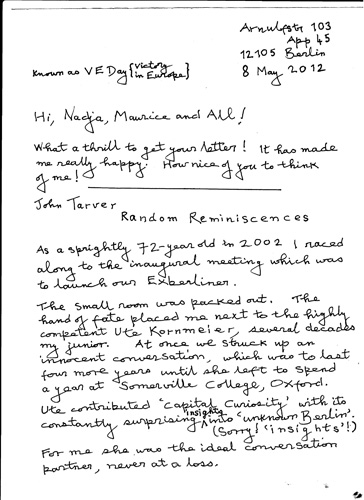 A devoted communist since his teenage years, John Tarver moved from Oxford to East Berlin in 1976 to become Head of English at Postdam University as well as a Stasi informer. At 82, Tarver is a fervent Catholic and our most senior contributor, involved in the magazine since its inception.

As a sprightly 72-year-old in 2002, I raced along to the inaugural meeting that was to launch our Exberliner. The small room was packed out. From the outset I endeavoured to sell our papers; 20 copies, 16 outside my family, was my regular order. I expected the Deutsch-Britische Gesellschaft to show the most interest. Well, I usually sold six or seven copies at their events but never lost the impression that they thought our journal was something below their level, rather lower class.

Perhaps my most surprising selling point was the Roman Catholic Church. In Berlin for many years and in several different churches, we expatriate Catholics have celebrated mass in English with a native-speaking priest. A number of Germans, well able to understand English, regularly join the congregation and enjoy the coffee and refreshments afterwards. Catholic we are, and Exberliner sells.

To think of Exberliner is to think of Dr. Dot. Hers is the first page I read (and I bet that’s true of many readers). At first glance simply sexy, just a minute’s read reveals her work as a deeply serious attempt to help people with intimate problems in a part of life essential to personal happiness. Right on, Dot!

Over the years Berlin has changed. I’ve lived here for 36 years and regard it as my home in every sense. I came to the East in accordance with my political convictions at the time and inside my first year here became secretary of BAUT (British and American University Teachers). This was officially sponsored by the old GDR, which meant free travel to our meetings, normally three a year, and other small fringe benefits.

As secretary I had frequent private meetings with the state security people – the Stasi – and only a brief, purely formal, meeting with someone from the Ministry of Higher Education once a year. Such was the GDR.

Not long before everything collapsed in 1989, the GDR decided to favour us with the right to vote in local elections. Of course GDR elections were only a matter of for-or-against a recommended list. As far as we could ascertain, from the 80 or so BAUT voters about 40 went to the polls, of whom some 30 voted ‘against’. Their main grievance: cramped accommodation. It was no wonder the Stasi men were puzzled – they lived in similar tiny flats themselves.

All in all, life went smoothly. Of us 80 about a dozen were hard-line communists who settled permanently. The rest were on two-year contracts, no different from other countries.

Just once there was a sensation. An American girl on such a contract fell in love with one of her students. Before long she noticed his striking resemblance to one of her British colleagues. Bingo! The day soon came when the GDR student presented ‘his’ British passport at the border. The GDR guard, bored to death with checking a hundred faces and photos every hour, took his usual glance – and waved the young man through. Two days later the passport was returned by post.

Naturally the Stasi went bananas! I managed to persuade them to accept my assurance that the British teacher was of impeccable character (although I had never met him and never did). He kept his job until his two years were up.

Did the love-struck American girl steal the passport? Passports are usually kept in the safest of places. I know what I think, but far more important than that is my unbearable distress at the way our beautiful world is mutilated by the restrictions we impose on one another.

(My pen expired peacefully on this page. How sad.)