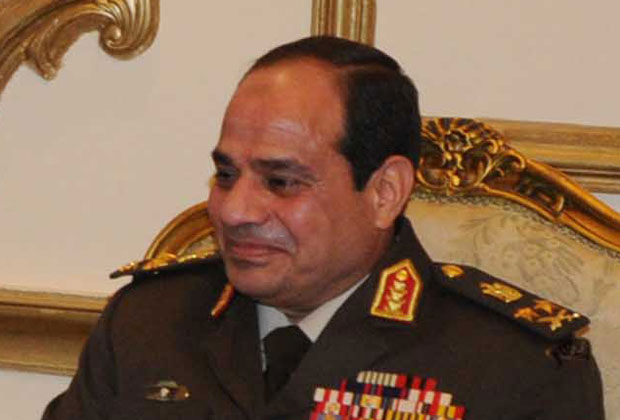 Some people have been describing Egyptian leader Abdel al-Sisi’s state visit to Berlin this week as “controversial”. They’re nearly right. What they meant was: “it’s an absolute fucking disgrace that sadly illustrates how Merkel’s morality-free government is willing to sell off Germany’s conscience.” Both Joachim Gauck and Angela Merkel should be ashamed of themselves for not only shaking the hand of a man who runs one of the biggest militarized police states in the world, but giving him a free ride while he was here. Meekly pointing out a “difference of opinion” on the death penalty is not the same.

Merkel and Gauck both lived under the Stasi regime in East Germany. And I know politics is politics, but do you think just one of them, deep down, might have felt a tiny pang of solidarity with the 40,000 political prisoners in Egypt? People who live in conditions like this because they went to the wrong demonstration? Do you think a bell might ring in their realpolitik-frozen hearts when they read stuff like that?

We may have forgotten it (because the white one is free now), but two Al Jazeera journalists – Mohammed Fahmy and Baher Mohammed – are still in prison for being journalists. Al-Sisi has also clamped down on the work of NGOs in Egypt. Plus, he keeps delaying parliamentary elections – a year after his own election, which means what laws he’s passed have been by his own decree. Until recently Germany made the parliamentary election a condition for allowing al-Sisi’s visit. That condition was quietly dropped. But why?

On the same day as al-Sisi’s visit, Siemens announced its biggest EVER deal – with the Egyptian government. Worth €8 billion, the deal means the German multinational is going to provide 24 turbines for three monstrous gas power stations in Egypt. Siemens’ CEO Joe Kaeser called it an “historic contract.”

I understand that protecting Germany’s exports is what Germans expect from their leaders. And it’s great for Siemens turbine makers (they will be built in Moabit, by the way). But do we really have to do deals with murderers SO blatantly? Can’t our leaders just pretend to be slightly ashamed of themselves? Is that what politicians are these days? Salespeople? If this is all it takes, maybe a few other dictators would be interested in buying some German stuff in exchange for a photo with this passive, principle-free leadership? Perhaps Bashar al-Assad could discover a taste for Nutella. Or maybe Robert Mugabe would like a few Bosch power drills? If he buys a batch of VWs, Merkel might put in a word for him at The Hague. Kim-Jong Un will probably have to buy all kinds of shit, mind. But everyone likes Maggi once they try it.