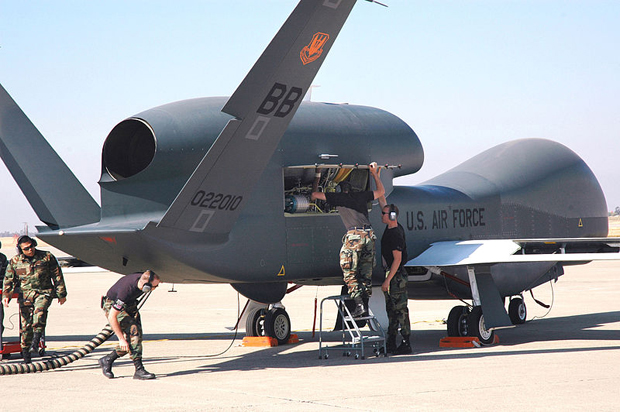 I have now read the whole of this week’s Der Spiegel article about Defence Minister Thomas de Maizière and the drone scandal. And “drone” is the word. It goes on and on, for seven massive pages, scrupulously not leaving out any brain-melting detail about how this ministry official should have known about this catastrophic cock-up by then, and this committee should’ve been aware “spätestens” by, like, the medieval times, that the Euro Hawk’s wings were likely to fall off if someone left it out in the rain.

I’m not asking for thanks, but just so you know, I am sure I have now worked my way through more German sentences that begin “Spätestens jetzt hätte das Beschaffungsamt klar sein müssen… ” than you’ve had hot dinners. No wonder de Maizière didn’t know half of it until last week. If it was my job to read all those reports about how shit the new drone was, I’d probably have pretended I had read them too, and vaguely hoped that no parliamentary committee would ask me about it in the future. Well, turns out he should’ve crossed his fingers.

Anyway, to save you the bother I’ve found the funniest bits:

1) Someone leaked this video from the Bundeswehr’s secret archives onto YouTube, which shows a small German “Luna” drone nearly crashing into a passenger plane over Kabul in 2004. After expertly analysing the video, experts expertly concluded it would be a good idea to have an anti-collision system on the Euro Hawk. Then the ministry saw the bill and decided, “Nah, it’ll be fine.”

2) One of the manufacturers of the Euro Hawk, US company Northrop Grumman, had a clause in their contract that said they only had to make a drone that would pass EU tests “to the best of their ability.” If the drone they made didn’t pass the tests, then the Bundeswehr would still pay the bill, comforted by the fact that the US engineers did do their best.

3) In 2009, some German officials flew to California to observe the Euro Hawk being assembled, which they were required to do by EU regulations, only to find that the American firm, seeing as they didn’t give a flying a fuck about EU regulations, had already put the drone together. “It’s a failure that cannot be remedied anymore,” one of the officials wrote in his report. And then, just to take the piss, the Americans wouldn’t even let them fly it back to Germany over the US, so they had to take it across Canada and Greenland.

But that’s it. Those are the few drops of mirth I have managed to squeeze out of this one. Maybe the funniest thing is this: sunk in that seven-page swamp of text about who knew what when about the half a billion euros that was spent on a crap robot plane that couldn’t fly in “snow, ice, or a strong side wind,” there is a short sidebar interview with a lawyer who says that, by the way, killing people with drones is sort of against international law. But hey.