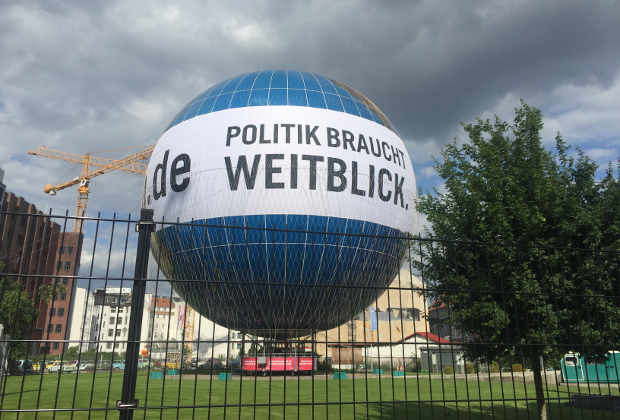 You know the Die Welt balloon – it’s the airborne tourist floater just off Friedrichstraße that is both a massive rubber globe and an advert for Germany’s second-favourite source of populist panic? You might have noticed that, since the beginning of June, it doesn’t say Die Welt on it anymore. Instead, it currently carries what looks like a political slogan that translates to “Politics needs a long view.”

That’s weird, you might think. Who would pay what was probably a fair amount of real money to put the most literally meaningless slogan ever on the side of a balloon, and then not even say who you should vote for or what you should buy? Who is this fool with too much money and a bland statement to make? Turns out, if the wind blows the big vessel round the other way, there’s a website on the back of the balloon – insm.de – which stands for the Initiative Neue Soziale Marktwirtschaft – or the “New Social Economy Initiative.”

This, it turns out, is one of Germany’s most powerful lobby organisations. This PR operation has an annual budget of around €8-9 million – according to Lobbypedia – which all comes from Gesamtmetall, aka the Federation of German Employers’ Associations in the Metal and Electrical Engineering Industries.

In other words, the people who think politics needs a long view are Germany’s major industrialists. And if you visit insm.de, you find out that a “long view” mainly means raising the age of retirement and cutting pension contributions, taxes and social benefits. That big balloon all those fools are bobbing around in is actually all right-wing.

There’s other stuff to know: the INSM is also a subsidiary of IW Köln, an economic think tank paid for by the Federation of German Industries (BDI) and the Confederation of German Employers’ Associations (BDA), which frequently puts out studies that say Germany needs to cut taxes and reduce its debt before it deals with the country’s creeping poverty gap, and which German newspapers – particularly Die Welt, as it happens – often report as independent economic studies.

So in case you ever wondered why certain German newspapers don’t criticise German businesses – it’s because they get their stories from them. Funny, yeah? But not funny ha-ha. More funny-oh-that’s-another-innocence-broken.

There’s more of this sort of talk on Konrad’s podcast, News des Nachrichtens, with Drew Portnoy: