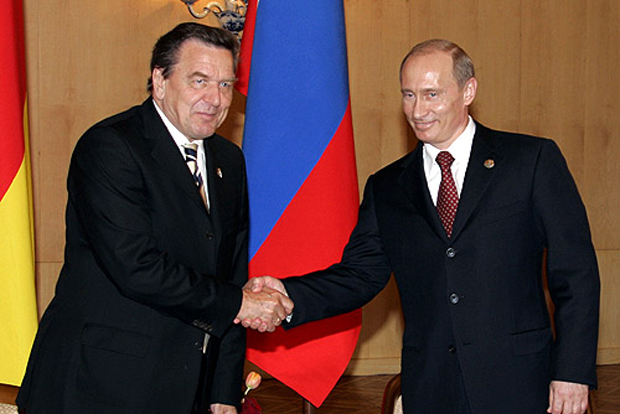 Philipp Mißfelder has lots to do. His calendar is full. He is Merkel’s party’s foreign policy spokesman in the middle of the biggest world-peace-threatening crisis since the end of the Cold War. Vladimir Putin is playing dare with the EU, moving his military around along the Ukrainian border, and pretending that the pro-Russian, Putin-supporting separatists currently separating off bits of Ukraine are just, you know, doing their thing. Meanwhile, German OSCE workers have been “detained” or “kidnapped” by pro-Russian separatists in the town of Slovyansk. Things are tense, Philipp Mißfelder might have noticed.

Not too tense, though, for him to suspend his social life, which this week included a trip to St. Petersburg to attend Gerhard Schröder’s 70th birthday dinner, where Putin was the guest of honour. There was a picture of the two large men – president and beaming 70-year-old Gazprom lobbyist and professional Putin apologist – exchanging a warm, manly hug (flanked by stern-looking bodyguards) in all the papers. A lot of people thought this was a bit too cosy, but little did they know that Mißfelder was presumably already inside, laying himself out on the table with caviar on his nipples. Not surprisingly, Merkel was meant to be a bit pissed off that her spokesman didn’t tell her that he was going to this party to carouse with the man who might be about to start a world war. When he got back, Mißfelder pretended that he’d gone for work reasons all along (sort of like when you have dinner and keep the receipt for the Finanzamt), that the mood at the party had been “really serious”, that basically he’d only gone as “a private person” hoping to help ease the diplomatic tensions, and that Schröder and Putin had licked him nice and clean.

What’s particularly annoying about all this is that this 34-year-old Putin-gimp is also the head of the CDU’s youth movement, the Junge Union – a kind of spoddy, yappy version of the CDU – basically the CDU but with fresher, more excitable hormones. Both Mißfelder and JU have been howling with righteous outrage because an opposition activist in Belarus has been taken prisoner by the “dictatorial regime” of Lukashenko. But their FB-based outrage has been very quiet on the whole Russia/Ukraine thing. I guess that would be rude, seeing as you’ve just been swimming in champagne together.