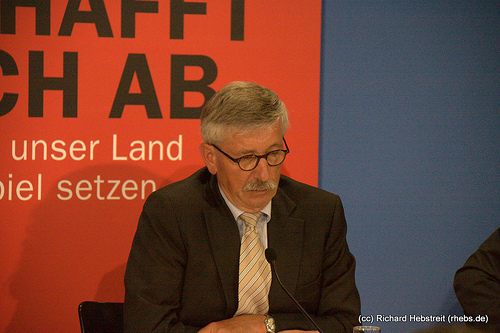 There’s a scene in Michael Mann’s magnificent crime caper “Heat” where jaded cop Al Pacino comes home to find his wife has been sleeping with a bearded, lanky buffoon. Not only that, but this wretched tosser is sitting in grey pyjamas on the sofa watching TV. “Sit down, Ralph,” says Al, gearing himself up for one of his full-on, thumbs-in-his-pants, concrete-testicles tirades. “You know, you can ball my wife, if she wants you to. You can lounge around here on her sofa, in her ex-husband’s dead-tech post-modernistic bullshit house if you want to [Note Pacino’s trademark “sudden disdain for the trappings of modern life” – that’s acting, that is]. But you do not … get to watch … my … fucking … TELEVISION SET.” He then clatters around theatrically unplugging the TV and flounces off with it.

This scene almost exactly encapsulates my feelings on seeing Thilo Sarrazin being kicked out of a Dönerladen in Kreuzberg earlier this week. If I’d been in Hasir’s when that wretched twat had walked in with his gutless, beardy ZDF camera crew, and I could have channelled my inner Al Pacino for a single, glorious moment, I would have said, “You know, you can write all the stupid books you want. You can slag off my home and spend your sad existence insulting all the people in it. You can suck as much joy as you can out of this society, and poison the media with your hate-filled bile and generally make Germany a slightly more miserable place to live. But you do not … get to have … ONE OF THESE … FUCKING … KEBABS.” Then I would’ve stuffed as much salad as I could into my pockets and wrenched the entire stack of meat off the spit and stormed out, staggering under its weight. It would have been quite a scene.