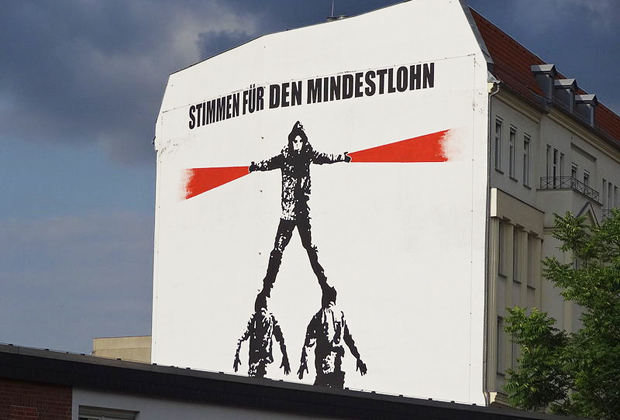 Friday marks 100 days since the German minimum wage was introduced on January 1. A hundred days of something is a thing in Germany. For a while now, businesses, and Focus magazine (a sort of FDP/AfD fan mag), have been telling us: “If you don’t want to turn into Greece, we’re going to have to keep treating as many people as possible like shit. Our advice is stop thinking about poor people.”

But this week the figures came through, and even Focus magazine was struggling to come up with good examples of why minimum wage is a failure. Taxi rides have gone up by 10 percent across the country. “Ah, but, look,” Focus bounced up and down waving, “we found a town in eastern Germany where the taxi rides have gone up 40 percent!” To explain, that’s the same eastern Germany where people generally have to do more shit jobs while Focus keeps telling us we should scrap the Solidaritätszuschlag because, really, the west is poorer.

Then Focus starts running out of ideas. The hotel association Dehoga has apparently reported a price hike of 2.5 percent. Erm. Okay. What else? Oh yeah, Spreewald gherkins are about to get more expensive, once the Mindestlohn comes into effect (agriculture got a longer grace period). So get ready for dirt cheap vegetables to be slightly less dirt cheap.

That’s it – all the other business lobby warnings have proved untrue. There has been no massive rise in unemployment, no massive price hike in consumer products and no broad complaints among the classic small business trades – hairdressers, restaurants.

The only problem with the minimum wage is that it hasn’t helped enough people – because it’s still too diluted by all the exceptions imposed by the CDU. The SPD’s Employment Minister Andrea Nahles, who pushed for it more than anyone else, has been touring the country to prove how well it’s been going. But then again, she might have added that’s mainly because not much has really changed. Only 4.4 percent of employees have actually benefited from the minimum wage, while all the people that really do need a minimum wage – mini-jobbers, part-time agricultural labourers – have all been left out. Basically, sooner or later we should get used to paying a bit more for those Spreewälder. That’s just the way it is.