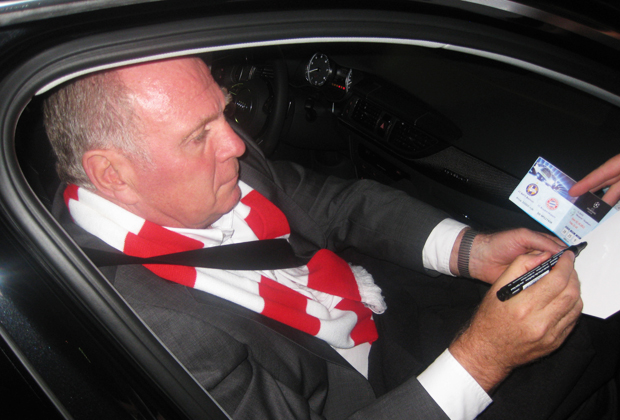 Oligarch is one of those words you hear a lot when people talk about Russia. Oligarchy is, according to one clever man, “the politics of wealth defence by materially endowed actors”, which is a definition that fits very well with what we’ve heard about those evil Russian billionaires. But – weirdly – rich German businessmen are almost never called oligarchs, even if – how should I put this? – they’re balls-deep into our political leaders.

Take Uli Hoeneß, the former football world champion and president of Bayern Munich – no one ever calls him an oligarch. He, you might have heard, just got rumbled for massive tax fraud. Turns out the football kingpin and sausage emperor has been keeping a secret Swiss bank account for about 10 years, and in January – after a Swiss-German deal fell through that would have let him settle his debts anonymously – he decided to tell the tax office about it. He paid several million in back taxes, while suggesting he may have squirreled away about €15-20 million. But something about the confession smelt rotten to the authorities, so they issued an arrest warrant in late March, and he was forced to pay another €5 million bail.

While the criminal investigation goes on, several German politicians have been rather quick to emphasize that they never had much to do with Hoeneß in the first place. Bavarian CSU leader Horst Seehofer, in particular has been protesting like an emotionally-wronged six-year-old next to a dead hamster that Hoeneß’ regular appearances at CSU events and his own appearance at Hoeneß’ 60th birthday party last year was all just, you know, politeness. Seehofer went on to make a slightly obscure distinction between “partnership” and “chumminess” when it came to fraternizing with successful business people. According to one newspaper, the CSU is supposed to have offered Hoeneß a place on an electoral list in Bavaria’s state elections.

And it’s not only the conservatives who courted the rotund powerhouse. During the 2005-09 grand coalition government, Hoeneß was regularly invited to consultations with SPD Finance Minister Peer Steinbrück, now SPD chancellor-candidate Peer Steinbrück. It seems likely that in these chats, and his other political dealings, the Bayern president would’ve lobbied the SPD man against taxation, just as he did on a recent TV talk show with Günther Jauch, when he said that tax hikes don’t work because, wait for it, “At the end the rich will go to Austria and to Switzerland.”

The only difference between German oligarchs and Russian ones is that people don’t get killed for reporting on them. So it does work a little bit, having a parliamentary democracy. But the partnership or the chumminess between political power and business wealth is as strong here as it is anywhere else.