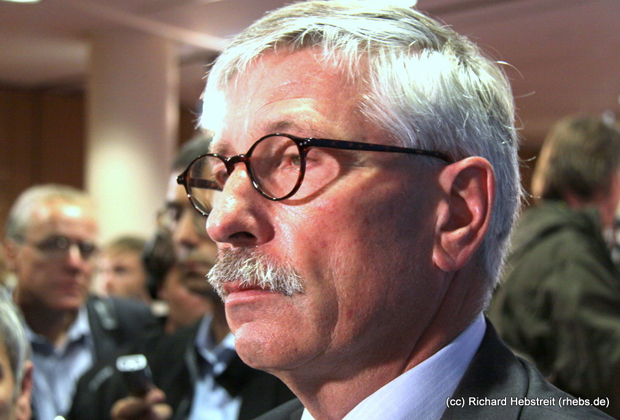 Parents at the Charlottenburg school have apparently been complaining about Mrs. Sarrazin’s heavy-handed teaching style for years. Parental representative Günter Peiritsch says, “Mrs. Sarrazin is an extremely problematic teacher. She is a burden for the school.”

Peiritsch reports that Mrs. Sarrazin upset kids by telling them they were lazy and unintelligent. This is because she believes teachers have to be seen as authorities. “It’s about creating the necessary working atmosphere for all the pupils. Only then is learning possible,” she argued. “It’s a delicate balance, but I’ve found that calling them thick and lazy usually does the trick,” she probably added.

Ursula Sarrazin thinks the moaning parents are just jealous. They were complaining because her husband had written a book slagging off the Turks and was now incredibly rich, while they were stuck with having to get their thicko kids to remember not to puke on their own clothes. Anyway, no-one had ever complained to her directly: “It would be right if the parents came to me first, so I’d know what I’m meant to have done wrong.”

Gallant Sarrazin sprang to his wife’s defence: “Some people couldn’t deal with the fact that my wife was no longer a normal teacher, but the wife of a celebrity.” Who did he mean by ‘some people’? “Those parents, one or two colleagues, and the school directors.” Hardly anyone then. These are clearly the protests of a sad minority of wannabe rich racists. Keeping up with the Sarrazins, eh?

But being a wealthy right-wing polemicist takes dedication. “What they should do is write their own book about stupid people,” recommended Sarrazin in another made-up bit. “I’ve already done foreign fucktards, so they can’t do that, but there are plenty of other total mongs out there. What about waiters? No one’s done them. I met one the other day who gave short planks a bad name. You should be able to get a book out of that.”