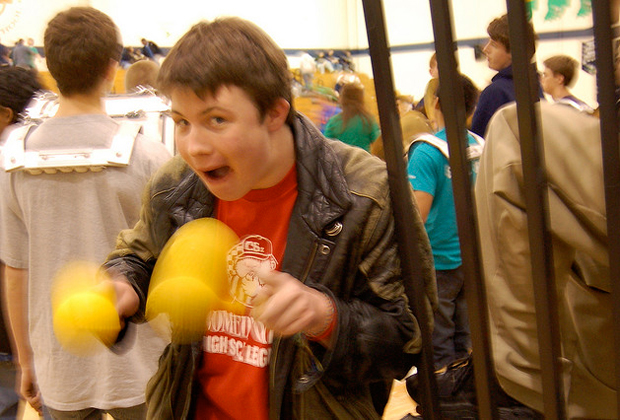 Just recently, this blogger wrote a blog speculating about what the purpose of the German president is, given that most of his job could be done by a large bag of starchy snacks and a balloon.

I have now penetrated this mystery. Thanks, as ever, to Black Grape. If there’s one thing I’ve learned in life, it’s that one should never attempt to unravel any of life’s great imponderables without scouring the slim oeuvre of the great Salford collective.

In Black Grape’s debut It’s Great When You’re Straight… Yeah album, someone called “Bez” is credited as being in charge of “vibes.”

Now, in most of the band’s stage appearances, Bez’s creative contribution was to pour LSD into open wounds in his own face and dance. As you can imagine, the result was very entertaining to the spectators, and served to inspire the other band members to give better musical performances. After all, Bez, AKA Bez “Bez” Bez, needed something worthwhile to dance to. When the band was in the studio, on the other hand, I imagine Bez had to think up other means of summoning the muse. He was the vibes man.

This is essentially Christian Wulff’s role in German society. While Angela Merkel must tackle the euro crisis and create surreptitious new tax laws, Wulff has to make sure everyone is in a good mood and give them drugs. But instead of drugs, he gives them the Bundesverdienstkreuz.

Up until now, he was quite good at this. Back in 2010, when the German people were getting a bit too carried away with their anti-immigrant ideas (again), Wulff did a good job of calming everyone down by sticking up for the Muslims. It was his best episode of jangling the country’s metaphorical maracas and doing a freaky dance.

But there is always a dark side. Like his Salford counterpart, Wulff is not very good at administering his financial affairs. Unlike the other Bez, though, he’s not very good at keeping the public on his side. It doesn’t look like he’ll be able to freaky dance out of this one.

This time next year, we might well see him on I’m A Celebrity… Get Me Out Of Here! But I don’t think he’d win.