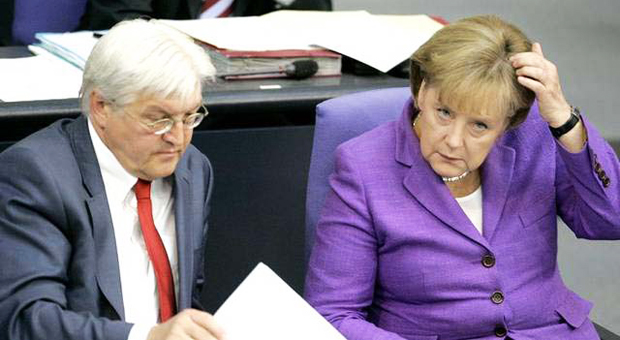 A lot of people think compromise is a dirty word. I don’t agree with them necessarily. Sometimes it can mean giving up everything you believe in for the sake of breathing in the farts of the powerful, like the Liberal Democrats did in Britain, and sometimes it can mean a state of constant political disaffection – the voters splutter and rage as the conservatives and the socialists creep along, resentful and dissatisfied, like children who can’t bear to share their packed lunches, begrudging each other smaller and smaller fingernail-scrapings from their sandwich crusts. But mostly I think coalition governments are okay, and more or less represent what most people – conservative, pragmatic people, but still most people – actually want.

But the CDU and the SPD are taking this micro-negotiating to a new level, they’re refining the refinement of their policies more and more, dissecting their ant-sized ideas, splitting hairs so small that passing insects barely notice. That’s fine, I suppose. It keeps them off the streets. If it wasn’t for the fact that these parties are already compromised in the bad, Lib Dem way too.

So for example there’s the dual citizenship issue: Germany currently has the rule that young Turks have to choose between being German and being Turkish by the time they’re 23 – this was itself a compromise introduced in 2000 between the CDU and the SPD and the Greens. While the SPD wants to get rid of it altogether, the CDU is only prepared to consider raising the age limit to 30, and possibly allowing people to change their minds afterwards – painfully compromising what was already an archaic, wretched compromise in the first place.

And then there’s the weapons exports. Here, the CDU and the SPD have an agreement. At the moment, all of Germany’s lucrative weapons exports are approved in secret by a council made up of the chancellor and a small group of relevant ministers, and their decisions are 1) only subject to human rights “guidelines” etc. and 2) presented to parliament in a special arms exports report once a year. But the two sides have agreed now to change that. What have they changed it to? Maybe they decided to make those guidelines into legal obligations, so that Germany will stop selling tanks and assault rifles to blood-stained regimes like Bahrain and Saudi Arabia? No, instead, from now on, the weapons exports report will come out TWICE a year. Hey, why get ahead of ourselves?

But this is a bit like complaining about waiting for the lights at pedestrian crossings. This is how Germans like to have their country run, and we can smirk all we like as we run madly over the road. But that doesn’t change the fact that Merkel and Gabriel and Steinmeier wouldn’t know a principle if it came up and ran them over.