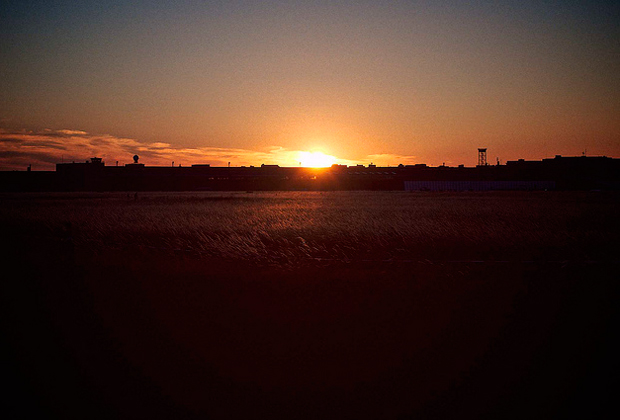 The security guard in the puffy black jacket was shining his flashlight in my eyes. I had turned on my iPhone’s flashlight and was shining right back at him. We held this pose for at least a minute. If this were a Western, I’m sure I’d be in the John Wayne role. But to an impartial observer, our flashlight standoff might have looked rather silly. How did we end up here?

Night was falling on Tempelhof Park and a group of friends had just finished their Grillfest. We were gathering up the grill and the blankets – the beer bottles had long since been snatched up by Flaschensammler – when security came to tell us that it was one hour after sunset and we had to leave. We said we were already on our way, but the bulky young man insisted on illuminating us while we worked. The only way I could explain to him that he was being annoying was a practical demonstration.

I won that standoff – he moved on – but it got me thinking: Why, exactly, does Tempelhof Park have to close at night? Over 700,000 Berliners voted to reject the construction of luxury apartments and keep the field open. But why does that only apply during the day?

I asked the PR agency – the brave souls in charge of spreading the lies of the construction mafia – but they couldn’t give me a straight answer. They also wouldn’t tell me how much the city spends on the nightly evictions.

The park needs to close at night because of “Sicherheitsaspekte” (security issues) apparently. But whose security is in danger? The neighboring Hasenheide is open 24 hours a day, and I’ve walked through at night without being murdered even one single time. Or are they worried that people will damage things? What, exactly, on that giant empty field?

The decision was made by Grün Berlin GmbH, a company that belongs to the Berliner Senat. Grün manager Christoph Schmidt and his team get to decide which gardens, which parties and which demonstrations are allowed – and how much they have to pay.

The field isn’t a public space – that’s why they can throw us out whenever they want. Grün isn’t really accountable to anyone – they don’t even have to answer to the Senat, let alone to park visitors. The Pirate Party, for one, demands that the parks stay open at night. The private company should be replaced by a public institution under at least some democratic control.

But still, why kick us out? An architect friend explained that there’s a whole science of making people think a certain way about a certain urban space. When Grün kicks us out every night, they’re letting us know it’s not our space – we can only enter their space with their permission. That way, the next time they try to sell the land to their realty speculator friends (and that’s just a question of time) it won’t feel like the robbery it is.

To summarize: Your tax dollars are being used to kick you off your field. And the reason, it seems, is to make it easier to steal the whole thing from you.

Does anyone else find this displeasing? The field was only opened to the public after massive protests and attempts to squat it back in 2009 (“Did you ever squat an airport?”). Now I think it’s time to squat the park at night too.