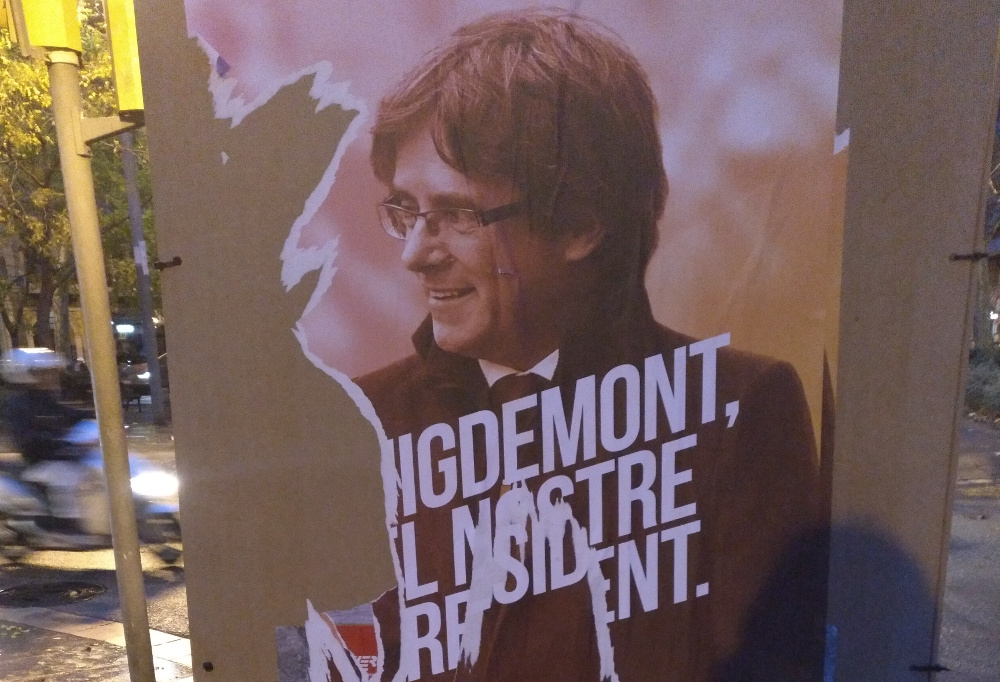 In our newest guest column, read our special on-the-ground reports of what’s happening on the streets of Catalonia from American journalist and Barcelona resident-of-two-decades Lynn Baiori. This week: how the political situation divides her friends.

JR and I have been friends for at least 20 years. In our many hours of conversation, both intimate and ordinary, he’s never displayed an overt interest in politics but is probably one of the most socially progressive, laid back, anti-authoritarian people I know. Last week, he sent me a message asking if I’d like to join him and his wife M. for vermut. We met on a calm, brisk Saturday morning. I arrived late and found them relaxing at an outdoor table in the square, each with a half finished glass of beer and a plate between them with a lone olive resting on it. As has been the case in recent months, practically every conversation quickly leads to the topic of politics and the looming parliamentary elections. Minutes after kisses were exchanged, we headed straight to it.

I expressed my concern that the independence movement had provoked a backlash of deeply anti-Catalan sentiment, using as an example the rise in affluence of Ciudadanos in Spain whose local chapter, Ciudadans, is likely to gain a record number of seats on December 21. M. suddenly got quiet. JR turned to me, red-faced and began to speak. I did a sort of cartoon double take as he angrily defended his reason for supporting a group that has managed to escalate tension while cultivating a reputation among some of its most ardent critics as the most virulent anti-republican party, alongside the Partido Popular, to spring from Iberian soil in recent history. (Among them, the Vice Secretaria General of the Socialist party, who recently compared Ciudadano’s leader, Albert Rivera, to José Antonio Primo de Rivera, the founder of the falange, a statement which she immediately felt compelled to retract, but it was out there.)

I questioned JR if he agreed with Ciudadanos authoritarian approach to managing “the Catalan problem”. “You know,” I said, “they proposed awarding medals to the police after they used rubber bullets and truncheons to violently brake up a non-violent act of civil disobedience. How do you justify that?” Under normal circumstances, he would have been the one making that case, but he neither defended or denied their record. I was so unsuccessful at trying to find some semblance of recognition, a shadow of the old anti-establishment flower child, that I soon began to realise there was no point; the process had struck a nerve and their was no dissuading him. I reminded him that if he wanted to vote against pro-independence groups, there were softer options. His wife was voting for the Socialists. “How about a nice socialist candidate?” But my friend had joined the rising popular consensus. He repeated the line that Ciudadans has so well established as its subterranean anthem; it was the only party able to stop the process in its tracks. Y punto! Later, as JR talked to my husband, who arrived two beers later, M. turned to me and said, “I’m as surprised as you are.”

For some people which group to support is less clear. Another friend laments he has no options. He won’t vote ERC (Republican Left of Catalonia), never CUP (Popular Unity Candidacy), doesn’t like the Socialist party. He is Catalan with strong nationalist feelings but is not a separatist nor exactly a unionist. He would never dream of voting for either Ciudadans or, heaven forbid, the Partido Popular de Cataluña. This is a cautious man, true to his conservative convictions, a loyal supporter of Convergencia, the disbanded center-right party that morphed into PdCat, and which later joined Esquerra Republicana to become the driving force of Junts pel Si, and is now running on its own as Junts per Catalunya, the party of the exiled Puigdemont.

“What would you do if you were me?” he asked me one afternoon, searching for an option he might have missed. “You’re asking me? I can’t even vote here,” I replied. He tells me he has become addicted to the nightly television debates. “You know me, I always voted for the Convergencia but I don’t think their new platform is coherent. I don’t know what to do.” I considered his options. “I think you’re screwed,” I tell him. “I mean, the only choice you have is to vote with your old party and hope they can’t form a majority.” He thinks about this. He is not normally an indecisive person but he’s uncomfortable with extremes. I see him again a few days later. “So have you decided who you’re voting for?” He shakes his head and barks a quick no.

Then there’s E. She sits at my kitchen table, rolling a cigarette while we talk about the possible outcome of the election. She has no doubt; she’s always been and continues to be a supporter of the CUP, a small, vocal, progressive, stridently pro-independence party. “It could happen,” she tells me. “There’s a lot of momentum for this now.” I reluctantly remind her of the poll predictions and she considers this, pragmatically digesting the possibility that it still may not be the time. “You know, I hate all of that flag waving,” she says, turning her head and blowing a gentle stream of smoke out where it won’t drift my way. “I’ve never been a nationalist. It’s not about that for me. But it’s just been so many years and we’re all so tired of dealing with the same story, the same answers from Madrid. It’s never going to change.”

I agree that it looks like things will likely get more divisive before they get better. We talk about the still unanswered questions, the uncompromising impatience of some of our friends and neighbors; we try to picture what is likely to take place in the weeks and years ahead. “Maybe it could still happen,” she says. I watch the tiny red tip burn brighter on her cigarette as she takes a drag. She exhales, talking into the air, “We could still wind up with a majority on Dec 22. Imagine what that would be like, waking up to the real possibility of a Catalan republic. We could finally do things our way, without Madrid holding us back. And we’d be founding a new nation.” She takes one last drag on her cigarette before extinguishing it, “Imagine being part of that.”