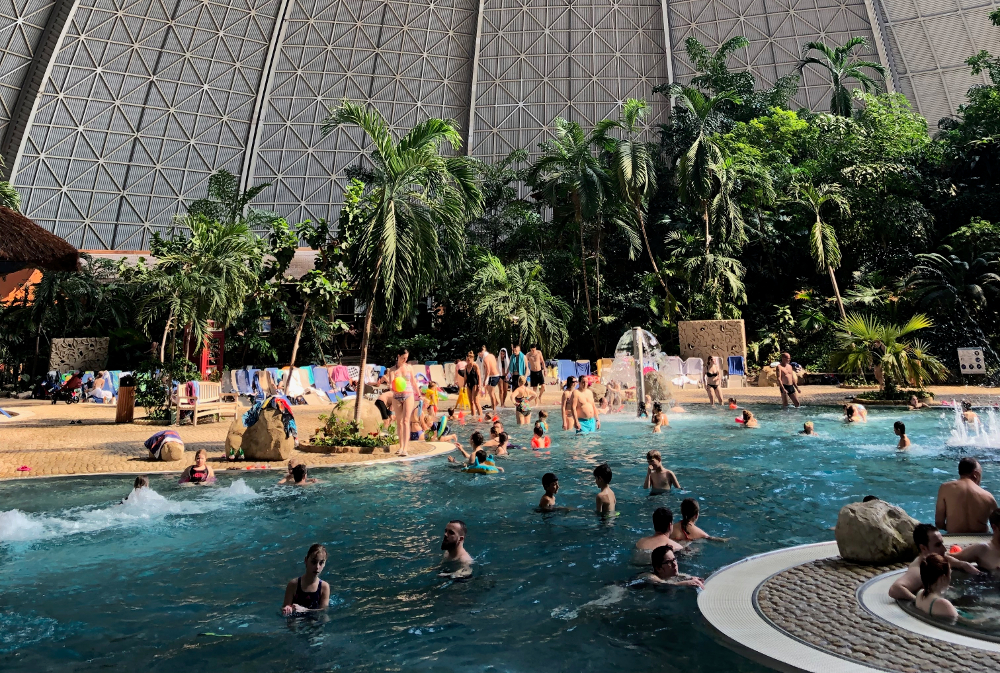 Nicholas Potter goes on an overnight expedition to find out why one would hang out in a former airship hangar filled with tropical kitsch, flamingos and squealing brats – aka Tropical Islands.

Could Tropical Islands provide a sunny beach break without a Caribbean-sized carbon footprint? And on a post-apocalyptic planet, could we eventually all live in isolated domes with artificial climates? These are my thoughts as I board the 09:51 regional train from Ostkreuz to take me on what promises to be an exotic getaway right on Berlin’s doorstep. Destination: a former airship hangar in the Brandenburg countryside that now houses the world’s largest indoor waterpark. As the Regio chug chugs through forests and fields en route to Cottbus, I put on Wham’s 1983 hit single “Club Tropicana”. I’m struck by how prescient the lyrics are, as if George Michael himself could have foreseen the logical inevitability of late-stage capitalism producing a humungous, artificial oasis in central Europe: “Fun and sunshine, there’s enough for everyone / All that’s missing is the sea”. Entry will cost you more than a smile, though. While day tickets start from €42 (unless it’s your birthday, in which case its free), there are also a variety of tents and cabins in and outside the dome, available for overnight stays. The lodge that is to be my refuge for the next 24 hours comes in at €140.

Nächste Station: Brand Tropical Islands. As the train pulls into the station, I eagerly look around to identify my fellow tropical tourists only to alight to an empty platform. Who goes to Tropical Islands on a Monday morning? So far, just me, it would seem. Soon, the shuttle arrives and I am the solo traveller on an empty ghost bus to paradise, kitted out with lime and fuchsia seats sporting exotic bird patterns. On the horizon: a giant dome, 107 metres tall and 360 metres across, it is as high as the Statue of Liberty and as long as the Eiffel Tower is tall. The airfield on which it stands has weathered its share of history. Originally built by the Luftwaffe in 1938, the Red Army captured the field in May 1945, not returning it to the German government until 1992. In 1996, German company Cargolifter took over the site and in 2000 completed building the largest free-standing hall in the world to produce airships, before filing for bankruptcy in 2002. The site was then sold in 2003 to the Malaysian company Tanjong, who converted it into the tropical waterpark we know today.

But it hasn’t all been smooth sailing. There have long been speculations about the park’s profitability as it has consistently fallen short of its annual visitor targets of 2.5 to 3 million guests, at the moment attracting 1.1 million tropical tourists a year. The park won’t release its financial figures, despite having received state subsidies to the tune of €18 million. The justification? With 500 employees, Tropical Islands is Brandenburg’s largest tourist-sector employer. Tanjong sold Tropical Islands in January for €226 million to Spanish theme park company Parques Reunidos Group, who plan to massively expand the park’s accommodation with 100 new holiday lodges outside the hangar. As the shuttle bus approaches Tropical-Islands-Allee 1, there seems to be ample space for expansion.

Passing through the park doors is like entering a teleportation machine that instantly transports you to a sultry summer resort far, far away. Thankfully a signpost reminds me that the distance to Berlin is in fact only 61km, and to Bali 9443km. The air is hot and humid. 29.7 degrees Celsius with 51.9 percent humidity, to be precise. Brandenburg’s Green Party have long criticised the park’s high energy consumption, not least because of the public money it has received. When Exberliner asked for figures on their carbon emission, the park was evasive and refused to give any out. Sweaty but happy that I changed into my flip-flops on the train, I join the queue at reception: a fake bamboo construction with elephant chairs and a corrugated metal roof. At the desk, I am welcomed by staff member Nancy, who is kept cool by the ceiling-mounted fans. She informs me that my lodge will be ready at 16:00 and is located straight ahead just before the flamingos. Real flamingos? Yes, she answers, real flamingos.

It’s 12:01 and, eager to hit the water and cool off, I head to the park’s 3000sqm Südsee – one of the dome’s two main pools. The route there is a windy jungle path, through what the park claims is the world’s largest indoor rainforest, past Florida redbelly turtles, the promised Flamingos and myriad butterflies. It seems almost clichéd to make a Truman Show comparison but upon arriving at the Südsee’s blue-sky backdrop, it becomes unavoidable. Fun-filled pool action is high on the agenda as an over-enthusiastic aqua aerobics instructor attempts to whip an unsuspecting audience of young lovebirds, hyperactive kids and tired parents into a choreographic frenzy set to Abba’s “Dancing Queen”. Sadly, her crowd seems more stuck in leisure-mode and her water-fuelled dance-a-thon fails to materialise, so I splash along to find my Badespaß in “Amazonia”, a more recent open-air addition. Feeling adventurous, I then visit what the park has crowned as Germany’s tallest waterslide tower: a 27-metre high metal staircase with blue, yellow and red slides intertwining like angry venomous snakes. After shooting down the third and second highest I decide to give the top “turbo slide” a miss: you’d have to have a death wish to go down that.

It’s 19:32 and the sun begins to set through the UV-transparent film that lines one half of the dome’s roof. I feel a hunger storm brewing in my belly so I head to the flagship fusion-kitchen of the park’s five restaurants, Tropical Gardens. The half-full “al fresco” (in so far as anything could be considered “al fresco” in a giant dome) restaurant offers a welcome moment of serenity from the cacophony of screaming children. While my table neighbours – a group of seemingly ravenous Saxons – go for beer and schnitzel, I decide to adopt a more when-in-Rome approach. Since I’m on an island, it’ll be double fish: zander slices marinated in tea and dill oil to start and teriyaki salmon on a bed of coriander fettuccine for my main course, washed down with a fluorescent Tropicana cocktail. The bill comes to €36.70 and I leave feeling tipsy and tropical.

If there was a brief for the park’s architects, it probably just read: ‘make it exotic AF’.”

The rum gets me thinking. Try to place Tropical Islands on a map (apart from in Brandenburg, obviously), and you are doomed to fail. If there was a brief for the park’s architects, it probably just read: “make it exotic AF”. Samoan beach fales sit next to Bornean longhouses and a liberal mix of Buddhist and Hindu iconography makes for a primary décor motif that reeks of cultural appropriation. Elsewhere standing at 14 metres tall, the park boasts the largest Balinese temple gate outside of Bali. While these gates typically provide access to holy sites in their native country, this one is straddled by a shopping boulevard full of plastic pool accessories and Hawaiian shirts on one side, and the Bali pavilion on the other, which houses a Japanese restaurant. Those needing to cover up before eating can borrow a kimono.

Trying to identify any kind of logic here is a futile task, so I wash away my doubts with yet another Tropicana. At night, the pools and paths come to life with vibrant lights, and I head to the “tropical laser show” at the Südsee. The gentle pulsating of strobes clouded by a mysterious mist make for a mildly stimulating show, recreating the aesthetics of an incoming tropical storm. The soundtrack, however, is an apt metaphor for the park itself: a careless hodgepodge of anything ostensibly exotic blended into a sickly-sweet cocktail. Think steel drums and bongos that segue into salsa trumpet solos before fading into Japanese koto music. The score does convey a dramatic tone though, and, feeling tense, I opt for a late-night visit to the spa to wind down. I head to the “Cambodian Angkor Wat”, a large stone sauna temple that honours the deity Vishnu. Sadly, it is closed for maintenance. Did Shiva destroy it? Instead, I go for the “Alcantara Canyon” which houses the “Gunung Mulu salt grotto”. Geographers among you will be quick to spot that the Alcantara is in fact a river in Sicily, while the Gunung Mulu is a national park in Malaysia, but these thoughts gradually melt away as I begin to embrace the mystical power of the healing heat.

After a soothing midnight dip in the Bali lagoon, I feel I’m ready to retreat to my lodge for the night. Behind its exotic façade – a thatched roof, white walls and wooden shutters shaded by palm leaves – is a comfortable, non-descript room with all the usual mod cons. Except for what are presumably some kind of African masks nailed to the wall, the room could just as well be in an Ibis Hotel in Bielefeld. I decide not to turn on the room’s aircon, which, in hindsight, is a sweaty mistake. The next morning, the all-inclusive breakfast is served in the Thai-themed Sawadee restaurant, which a sign informs me was inaugurated by Buddhist monks at the park’s opening. Any teachings the Buddha had on moderation are seemingly lost here. In an all-you-can-eat buffet, Weltmeisterbrötchen, sausages, Bouletten and even baked beans make for a welcome break from the exotic immersion and a fortifying meal to fuel yet another day of pool-action.

After checking out of my room at 10:59, I go for a long walk on the Südsee’s 200-metre sand beach where my tropical odyssey from Brandenburg to Bali and seemingly everywhere in between began just 24 hours earlier. As I stare across a sea of inflatable donuts, rainbow cocktails and tattooed dads that look like bouncers at right-wing biker clubs, I cannot escape the conclusion that this is indeed a very tacky place. But at the end of the day, it is also just a waterpark. And as far as waterparks go, it’s bloody fun. Yes, it’s suffering from a cultural identity crisis. But on the other hand, maybe that is precisely its allure: it can be anywhere you want it to be. When the end of the world comes, there would be worse places to be stranded.