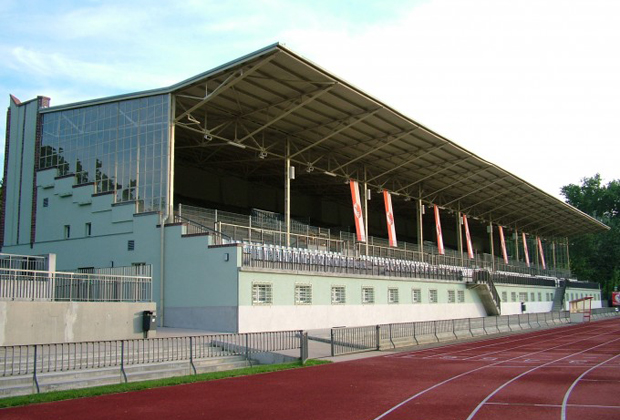 It’s not often that fans of lower-league football have the chance to see a former European champion in action. It may seem disingenuous to mention Magdeburg in the same breath as Bayern, Dortmund or Gladbach’s Europe-conquering squads, but their 2-0 over Milan in the 1974 Cup Winner’s Cup Final has assured their place in the history books.

Things have changed since those heady days in the 1970s though. Magdeburg now finds itself down in the Regionalliga Nord, and on Sunday, were responsible for the majority of the 1,446 present at the Poststadion for the encounter with Berliner AK 07.

One can’t help but feel a spot of sympathy for those travelling fans. Their enthusiasm has dulled not one iota since those silverware-laden years, and their constant chanting was by far the most interesting feature of a scoreless first half. Their fervour, however, is tinged with sadness – the GDR flags and 1970s-style retro shirts everywhere indicate that Magdeburg is a club with its eyes firmly trained on the rear-view mirror.

The same could be said for the men in blue and white on the pitch, as a solid defensive performance was responsible for ensuring that BAK were unable to turn possession into chances in the first half. Björn Brunnemann pulled the strings in the centre but the strikers, Ahmet Dereli and Paul van Humbeeck, were so tightly marshalled by the Magdeburg backline that the home side were forced to resort to thudding long balls forward. For a team that has a number of players with excellent technique when the ball is on the ground, it was a tactic that never looked likely to reap rewards, especially with the strikers pulling wide in search of space.

The game desperately needed a goal to open up the field, and Brunnemann provided it soon after the break, lashing home a loose ball from a deep corner. Magdeburg was forced to remove the defensive blanket that was smothering the game, and the results were almost instantaneous. Brunnemann was one of the main beneficiaries, suddenly having a plethora of options open to take advantage of his expansive passing game.

The play swerved from end to end, counter-attacks being counter-attacked and almost every one of them producing a decent chance. Dawid Krieger’s brace for the visitors, one of them an excellent long range strike, sandwiched a tight Dereli finish. With 10 minutes to play the teams were tied at 2-2 and the tension was evident by the fact that Magdeburg fans’ vocal support had been replaced by nervous murmurs. They would have been sickened by the preventable simplicity of BAK’s third – a free kick delivered high into the box, a header by Benjamin Gaudian so free that he barely had to jump when nodding home.

It was a grandstand finish as Magdeburg poured forward, demanding an equaliser. Their captain, Daniel Bauer, pounded a shot at goal from long range and the reactions of the BAK goalkeeper, Patrick Sobtzik, were phenomenal to push it over the bar, especially considering how much a deflection had altered its trajectory.

It was only when the resulting corner was cleared that it became evident that every member of the Magdeburg team, goalkeeper included, was in the attacking half of the pitch. One wonders what exactly the keeper was attempting to contribute by loitering inside the centre circle, but substitute Tom Kirstein was more than happy to pick the ball up inside his own half and stroll it into an empty net.

BAK, with their superior possession and thrust, were good value for the 4-2 victory. After losing their first four games of the season and threatening to emulate Türkiyemspor’s sorry record of not winning a game all season in last year’s Regionalliga, they have now won three of their last four and sit comfortably in mid-table. Today’s show, with Brunnemann in particular standing out, suggests that mid-table could be the least of their capabilities.

Read more at No Dice Magazine.