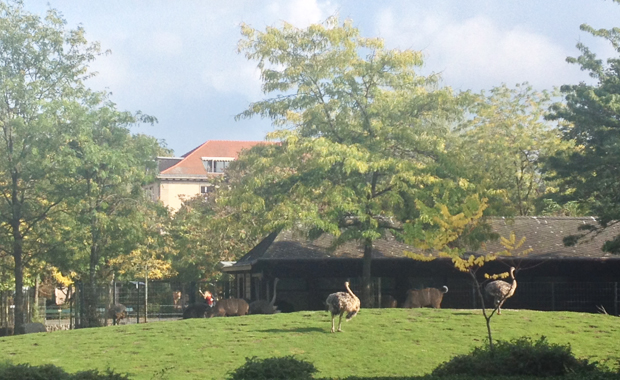 Now don’t get all excited.

Animal sex is what goes on between animals. Birds and bees. But however you define it, you’ll be sure to find some in Berlin’s Zoologischer Garten, where animals have been having sex fairly regularly since 1844, when the zoo was founded with the aim of entertaining and educating visitors (about 3 million in 2013) with information on the habits and habitats of wild species. Although if you’ve ever watched lions having sex you’ll need to revise the entertainment aspect. The male falls asleep pretty quickly after all the roaring. On the other hand, that’s also quite educative.

Berlin’s Zoologischer Garten has 1500 different species and about 20,000 animals. It cooperates with universities and research institutes and other zoos and takes part in captive breeding programs for endangered species. It keeps studbooks for black and Indian rhinoceroses for Heaven’s sake! It’s also a bit shabby.

So if there’s a price-tag on bio-diversity in Berlin, it’s currently being paid at the other place, the Tierpark in Friedrichsfelde. Just a couple of weeks ago, a family of boars was killed to make room for an endangered species of South American monkey. And now the Tierpark is due for a €5 million “turbo reconstruction”. Plans include building Berlin’s longest playground slide, reactivating the paddling pool formerly known as a duck pond and “creating” a woodland play area. We need the bio-diversity, for sure, but this is one special kind of Brave New World: a kind of Disney-fied Animal Farm of unnatural selection.

But wait. With all these kids around, with all the noise and the artfully enclosed “open” spaces, where exactly are the animals going to have all the sex, over there, in Friedrichsfelde?

There’ll always be nice quiet spaces in the lab. But if I were an animal, I’d head back to Berlin West, to the discreet, un-scrubbed scruffiness of the old zoo where the regulars hang out. Like the ostrich enclosure. It’s peaceful there. There are bushes and trees. I could have… well, never mind.