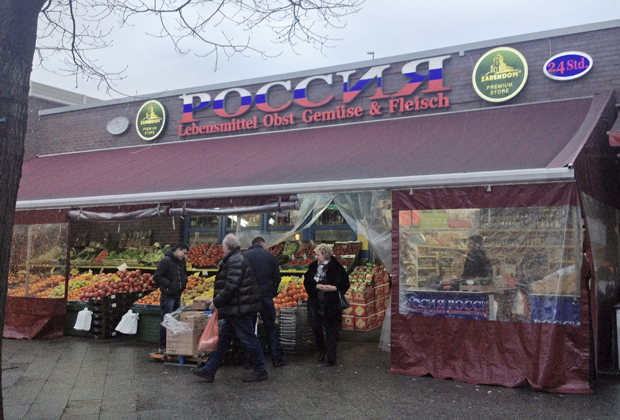 Of the 300,000 native Russian speakers living in Berlin, only 19,000 are registered as Russian passport holders. That’s really only a fraction of the total. Yet walking through the streets of Charlottenburg the jangle of Russian speakers in combination with frequent sightings of Russian number plates and not least, stores such as the above suggest that many, if not most Russians have settled in the corner of Berlin known in the inter-War years as Charlottengrad.

Yet their presence remains surprisingly inconspicuous. Intent or coincidence? The Russian soul apparently beats in small nooks of semi-exiled culture: little offbeat establishments of specialized reference such as the Russian ticket agency behind KaDeWe and the Berioska store some hundred yards away; a handful of Russian restaurants; a Russian bookstore on Kantstraße; and Rossija, the Russian minimarket and source of sweet-toothed despair on Stuttgarter Platz.

Some might say that KaDeWe is turning into a Russophile zone. But ex-Muscovites will also get down and dirty at Wilmersdorf’s TK Max gold label section. It’s that discreetly luxurious look that counts. How you got there? Not so important.

In fact, it’s the very discreetness of the money that’s remarkable. If the Vuitton hold-alls toted by the excessively well-groomed devushki (girls) at our gym are anything to go by, there’s plenty of it. But it’s never really obvious. The girls? They keep their voices down and don’t hog the upper level lockers. And if they have political opinions on where their money comes from (real estate, the energy market?) these appear to be secondary to discussions on the relative advantages of an 85-degree sauna as opposed to the 60-degree sanarium.

The Chekhovian irony of these co-existent realities manifested itself last week, as I sat dozing in the back row of an auction house off Ku’damm. Nineteenth and 20th century paintings were on the agenda. Business was slow. Many paintings went under price or not at all.

Slow, that it, until two paintings by Russian artists came up for sale. Snapping to attention like Tchaikovsky’s nutcrackers, telephone bidders jumped into action and before you could say ochin dorogo (very expensive) the asking price had well gone over double.

The winner was one of two Russian-accented gents seated near the front. He paid for memories of indefinable Slavic charm featuring two apple-cheeked maidens of the colourful headscarf variety leaning against a wooden fence srazu (immediately) and in cash. The rest of us dozed off again.

Where might that painting be hanging now? Above the mantelpiece, maybe, of some 300 plus square meter flat between Kurfürstendamm and Bismarckstraße? Some place that’s unlikely to overstate either its owner’s provenance – or the bank-balance that comes with it. Some part of an invisible network of moneyed power that remains well hidden from the curious glances of his neighbours.

As Nabakov said: the breaking of a wave cannot explain the whole sea. The Russian soul “bears” itself in snapshots: if and when expedient and necessary.

As for the bigger picture? As is (so often) the case in Charlottengrad, we’ll just have to settle for appearances.