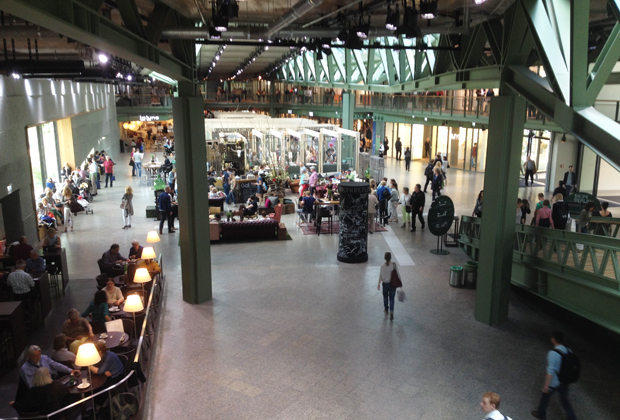 “Lebe anders” – “live differently” – is the apodictic motto under which the renovated Bikini House on Budapester Straße re-opened on April 3 as Bikini Berlin and now that the dust from several hundred thousand visitors has settled on Germany’s first concept mall. One thing is clear: living differently is going to require some pretty deep pockets. Because whether it’s iconic plastic seating for €1500 a pop at the Vitra & Artek store or “ecouterre” fashion from Umasan, concept consumerism is expensive consumerism and Vans’ “urban rebel” sneakers have come an awfully long way from their humble beginnings.

Before the hype, the Bikini House used to be what city planners called a shopping precinct with office space. When it originally opened in 1957, the planners made no bones about its status as part of Germany’s postwar economic Wirtschaftswunder recovery. But those days are well behind us. It’s all about linguistics now. Tagging the living differently ‘concept’ label to this latest variant on consumerism just whitewashes the fact that we’re still supposed to be spending. But it’s lifestyle, and it costs more, so it’s okay..

If only (ah yes) we could recapture some of the irony that inspired West Berliners to give the Bikini House its name back in the late 1950s. Originally the building had an open-sided “midriff” arcade (now long since closed up) between the ground floor and upper sections of the building. When locals began to refer to the building as a piece of vaguely risqué beachwear, they were giving their city an affectionate middle finger: “You might think this is all about the economic miracle of post-war recovery but we think it’s a bit of a storm in a teacup.”

The Bikini House is in its late fifties now. Maybe it needs a new name. Maybe West Berliners need a new ironic middle finger. What’s that line of “shapewear” for women over fifty trying to reinvent themselves as young, dynamic powerhouses? Spanx?

The Spanx House. Now that has a ring to it.