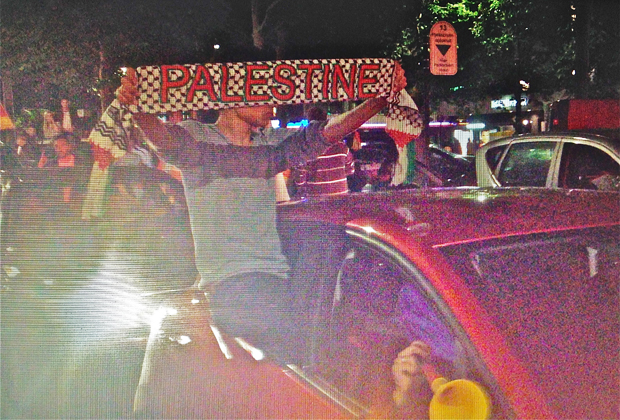 I wasn’t here for Germany’s 1990 World Cup win, so I can’t say what it was like back then. Wild, probably. I was there last night, however, and from (around) 12:30am onwards, Ku’Damm turned into a heaving mass of jubilation: honking, cheering, helicopters cruising, joints and cigars mingling with the carbon monoxide. Heady stuff.

Then an ambulance joined the fray and everybody got back into their cars and drove obediently to the side. Then they got back out and continued celebrating. Ordnung muss sein. It’s still Germany.

But don’t tell me (as if anybody would) that football isn’t about politics. And not just the big politics of Putin, Blatter, Rousseff and Merkel sitting awkwardly in close proximity at the Maracanã. And not just the whistles that greeted Blatter when it came to presenting the medals (Congratulations, by the way, good game: not one of Germany’s best but in terms of a final, a good game).

This is small politics. Grassroots stuff: young men (mostly) waving pro-Palestine banners – and quite a few with something to say on Syria. It was a welcome sight, between all those other flags. Because life will go on after July 13. 2014. Forty thousand Syrian refugees have fled to Germany. More will come, from Syria and elsewhere in a re-ignited Middle East. If they can be integrated to the extent that they join (and not just co-opt) the soccer celebrants on Kurfürstendamm with messages of their own – after a World Cup win – then hopefully, Germany is doing something right. It could do more.

Some of the guys on the field last night looked pretty lonely, scared even, after the final whistle. Müller, Götze, Klose, Neuer: there were shots showing them looking pretty haunted. Because victory is scary. Officially, you are now the good guys, the ones who did do everything right.

Re-unified Germany has come of age as a soccer team, touting all the qualities that Germany claims for itself: discipline, team spirit – and humility. Keep that flag flying.