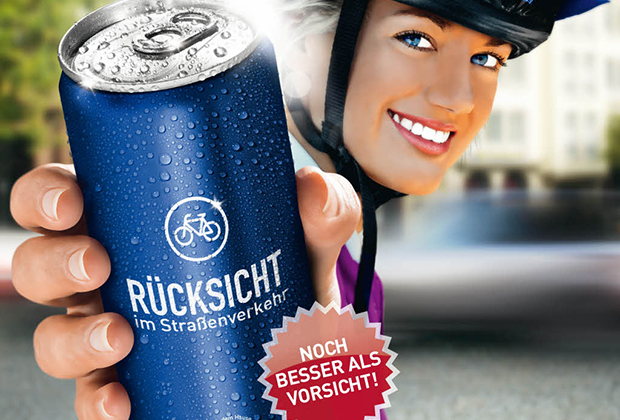 Recently though, I’ve been entertaining thoughts of a more pernicious police strategy than that of merely posting bike police at notorious transgression spots. After all, I cycle pretty much all over the city, so how can it be that there’s been a sudden increase in fines – all imposed close to home? Four, five times I’ve been stopped, in as many weeks. This isn’t coincidence. It’s Kiez profiling.

1. On the ‘wrong-direction’ cycle path on Bismarck Straße. Stopped literally about 30 meters from the entrance to the local police station. Talk about your lazy officialdom. The chief comes in and says: “listen guys, we haven’t met our quotas yet, just pop out and see what you can do during lunch break. Twenty bucks says you can’t book more than 10.”

2. Cycling down our one-way street. The wrong way. Listen: everybody does it. Especially when it’s after midnight and the street’s empty because we’re on tomorrow’s marathon route and parking’s been cleared. I swerve in graciously, scarf flying. Behind me the squeal of mittelklasse Volkswagen tires – it must be the police controlling the parking situation. I hop up onto the pavement but it’s no use. Out come the loudspeakers, the police leave their car in the middle of the road, disrupting the (by now) oncoming traffic (for an extra €5 on the fine) and a completely uncalled for loudspeaker that alerts the neighborhood to the prevailing traffic regulations. Lights go on. People come on the balconies. Lighters flare in the dark. Bill and Ben take down my data. After they leave, my neighbours commiserate. “Tut uns echt leid.” Yeah. Thanks for nothing.

3. Cycling along Hohenzollern Damm (Schöneberg) in the right direction on the cycle path, full daylight, lights are working but off (check), tires are pumped (check), chain is oiled (check). A policeman stops me. I’d been checking messages whilst waiting at a red light and the phone was still in my hand. Off, but still in my hand. That’s what I was stopped for. For “holding a phone in my hand.” No fine. Just a long-faced lecture. It’s almost worse.

It’s surreal. And it’s not just me. A young and penurious friend was recently fined a whopping €150 for the wobbling over a red light in Tiergarten (repeat offender). Retired civil servants are being publicly berated by neon-jacketed bike police for cycling through pedestrian areas on Adenauer Platz.

So what is it? Is it the Barbours and Burberry trenches casually matched with Supergas wellies that mark us as likely-to-pay when it comes to sending out the fines?

I think not. With all due respect: going by the admonitory flyer that they send out with fine notifications, I don’t think Bill and Ben are up to that kind of sartorial discernment. Take a closer look. Isn’t that George Michael pre-Wham?

If you ask me, it goes deeper. Because it’s one thing to be dealing with a spot of rambunctious disregard for the biking rule of law in Neukölln or Wedding. But when the law abiding Bürger of Berlin West starts cycling down one-way streets in the wrong direction? Clearly, we’re on a one-way street to anarchy and it’s only a matter of time before we start stealing mugs from Starbucks and illegally downloading old Seinfeld episodes, boycotting flagship Ku’Damm stores and shopping at KIK. World revolution? Definitely in the cards.

So they’re nipping it in the bud, now, whist they can. With a €25 fine and a lecture on road traffic safety. And let’s face it: it’s a small price to pay. For a taste of anarchy. In Charlottenburg. Just don’t push your luck.