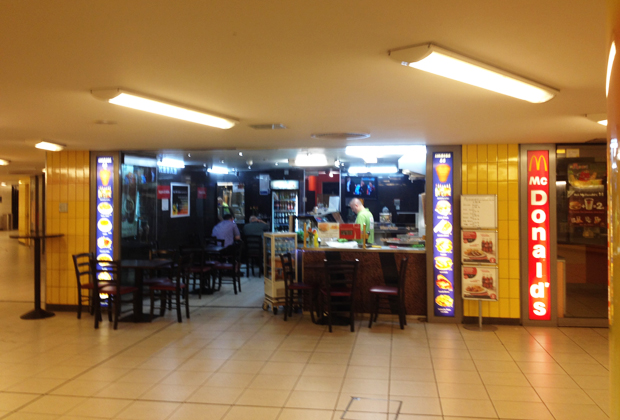 Every four years it’s the same irksome question: where to set up camp and watch as much of the World Cup as possible without forgetting your own address. Some lesser-interest midnight matches, and those that start at 3am can be watched privately, semi-comatose: in general, some kind of public atmosphere heightens the experience. Best of all is a mixture: a quietly contentious, argumentatively friendly but non-domestic atmosphere and the kind of familiarity inspired by genuine passion and a modicum of expertise. It’s not much to ask.

In previous years, the local sports bar just down the street has been quite welcoming. But now that most of the establishments in Charlottenburg are non-smoking, residual sinners congregate here and you come away smelling like a stag night in South Benfleet.

This year, I’d set my sights on the bar/restaurant at my gym. It’s quite up-markety and the installation of three flat screens in a space the size of a largish sauna looked promising. I caught the second half of the Spain vs. Netherlands game there. It seemed okay. So I turned up in time for the kick-off of Germany vs. Portugal with high hopes.

Think, woman. All these guys who heave and grunt their way through spinning classes, weights and non-wuss varieties of yoga weren’t about to turn off the Alpha posturing now. A babel of opinion washed over the premises. I stuck it out to 2:0 – and made my way disconsolately into the cardio room. It was full of women watching How I Met Your Mother. Vague cheers through the open windows greeted the third and fourth goals.

My gym is at the upper end of Kurfürstendamm, maybe 1km from Adenauer Platz: the bar and restaurant end. Cycling home I counted 36 flat screens showing the Iran vs. Nigeria game – and all about as inviting as a cold shower. So I locked up my bike and popped down to the Adenauer Platz U-Bahn arcades for a döner in the two-table café. The proprietor was watching the game. His son was sitting behind him, giving him a shoulder-rub and explaining the offside rule – in German, for the benefit of the Pakistani who’d ambled over from another bude. Things were looking up. I settled down at the other table. Courteously, the son invited my opinion on the Japan vs. Ivory Coast game. I had to pass… but proffered the information that hadn’t Drogba come on late and turned things around? Then it was halftime and time to listen to explanations of what’s going on in Iraq.

This could be it. Home from home. The hearth of summer-time soccer. We’re invited to a swanky private viewing of the German vs. US game on June 26. It’s just possible that I’ll have a headache requiring medicinal döner treatment on that day.