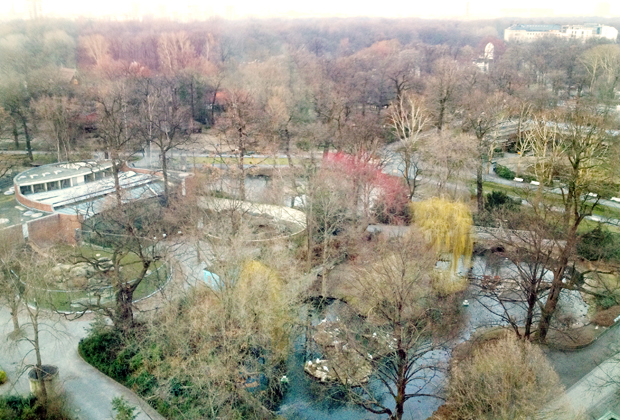 Berlin (West) has something radically new to offer: a bar with an unusual name – the Monkey Bar, on the 10th floor of the 25 Hours Hotel on Budapester Straße! It has a view of the Bikini House (renovation nearing completion), the Europa-Center (renovation pending), the stub of the Kaiser-Wilhelm-Gedächtnis-Kirche (will never be renovated), but it’s called the Monkey Bar because you can also see the monkey cage directly below in the zoo. I’ve never actually seen a real monkey from up there. Only birds. The monkeys are probably sitting in a corner, playing with their genitals.

So I’ll admit it. I’ve been there three times now, in about as many weeks. But in my defense, with out-of-towners. Because the views are impressive. But each time I go, I feel a little bit more treacherous. Why support a place like this? It doesn’t need me. In the early afternoons, it’s full of elderly tourists gingerly sipping an alcohol-free beer. Later, the blond pigtails come to inhale champagne cocktails and flirt with men with fashion stubble. Is this what we’ve come to? Prime space for people to take photos before turning their back on the panorama to check their mails?

There’s an apparatus on the wall, a kind of electric spider that you can stand in front of and clap so that it changes direction, tracing a pattern as it moves. I think it’s supposed to be modern, interactive art.

It’s also an impressive and I’m guessing unintentionally brilliant metaphor for its surroundings: completely random. This is just another place with good food, good views and the latest version of shabby industrial chic (hand-scrawled directions to the loo).

Napoleon kept a monkey (in exile on Elba), so did Graham Greene’s auntie. The romantic poet Swinburne was accused of bestiality with one. Virginia Woolf (who visited Berlin and called it the “ugliest town in the world”) took her pet monkey (well, marmoset) on travels with her and Voltaire, who spent years at the royal palaces in Potsdam, privately referred to Prussia’s King Frederick the Great as Luc, an ape with a trick of biting: there’s a local hook if ever there was one.

But who needs research and local relevance when you’ve got free wifi and a cocktail list the size of a monograph on The Origin of Species? Now that the summer’s here, I’ll be whipping guests up the Siegessäule for views and walking through Tiergarten to sit in the sun at the Schleusenkrug. And leaving the Monkey Bar – to the monkeys.