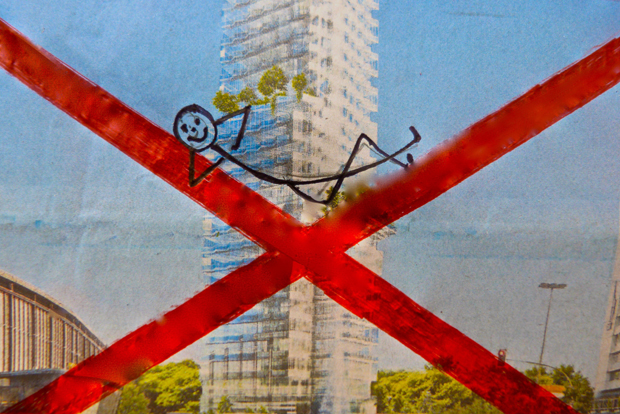 There are new plans afoot for the Hardenbergplatz – that’s the amorphous parking/bus-lane area between the western zoo entrance and the Bahnhof Zoo railway station. Along with architect Christoph Langhof (designer of the Upper West 118-meter-high ‘skyscraper’ going up just down the road on Ku’Damm’s Breitscheidplatz), the AG City feels that visually, this is a space that’s “crying out for skyscrapers”.

The AG City; that’s a self-appointed organization that mediates between businesses, culture managers, industrial chambers and local authorities and what it’s proposing here is to fill that space with Langhof’s design for the “Hardenberg Tower”: 209 meters of flats, offices, retail spaces and the obligatory hotel with greened facades. It looks like spinach in your teeth – vampire’s teeth.

How, precisely, is this space “crying out for skyscrapers”? It’s smallish and bordered by low-to medium-rise buildings as well as the zoo and the Tiergarten to the north and east. Sticking a skyscraper down here will look like a pitchfork on a matchbox. The other ‘skyscrapers’ in the vicinity are about 120 meters high. So give or take a couple of meters, this would be nearly twice that.

It’ll probably come to nothing. The Senate is “keeping mum” and our friend Marc Schulte, Charlottenburg’s Municipal Construction Counselor, is “skeptical”. So who exactly is in favour?

According to AG City, some investors have shown interest. Need we say more? On their website (see above), the AG claims to respect traditions. Do they also get to decide what those are and which market forces sponsor them? If you want to join the discussion, they have “city talk” town-hall meetings at McDonalds on Ku’Damm. But wait: what’s that in the small print? It’s by registration/invitation only.

What’s the betting that those traditions don’t include the Dunkin’ Donuts and other slightly shabby enterprises around Hardenbergplatz? Not to mention the small camp of tents and sleeping bags “inhabited” by the homeless just to the north of Hardenbergplatz on the fringe of the walkway leading to Tiergarten. People pass by everyday. Lots of people. Some stop, some don’t. It’s just there, accepted. But not by Langhof and the Arbeitsgemeinschaft for whom this transition to Tiergarten feels “unintentional”.

But there’s nothing wrong with ‘unintentional’. Every city is a playground of zones with bullies, smart kids, protected babies – and those that never seem to get on the swings. It doesn’t mean they shouldn’t be visible – in spaces that aren’t intentional but just there, in the open, as a fact of random coexistence and social differences and just possibly an inspiration to do something about it (like volunteering at the Bahnhof Zoo’s soup kitchen).

So stop treating City West as a model on which “construction options” can be simulated to attract investors. There’s people living here too.