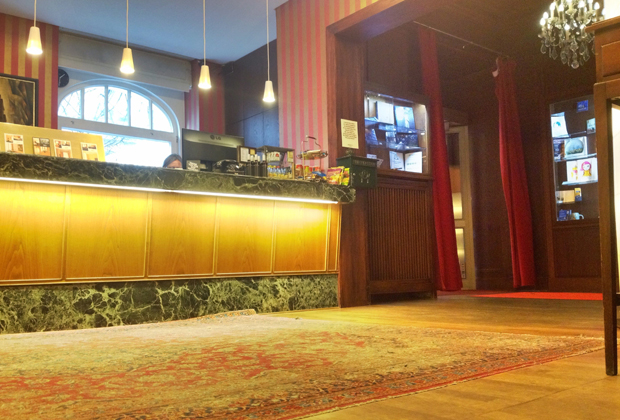 Ever since we moved to Berlin, the Hotel Bogota on Schlüterstraße off Kurfürstendamm has been a fixture. Not that we stayed there – we have a flat to inhabit. But cycling down Schlüterstraße, almost daily, the sight of the bright orange awning stretched over the pavement invoked shades not only of pre-War Berlin plus a century of history, but a feeling of linkage: to hotels redolent of Graham Greene’s Havanna or Saigon, in which restless and rootless itinerants pursue very private agendas.

The hotel’s online website quotes the likes of Rupert Everett and Keira Knightley. No surprises there. Its rooms exude the faded charms of any number of English hotels from Scunthorpe to Southampton: the kind we used to stay in as kids, wishing away a rainy summer holiday, reading short stories by William Somerset Maugham on threadbare chintz, picking at the potted plants and staring at imaginary silhouettes in the faded wallpaper.

But who wants bright and shiny when you can have imagination? And what will happen to memories like these when they no longer find places that serve as suitable repositories? Places, like the Hotel Bogota, which let us step into alternative identities and experiences that are more valuable, surely, than just dossing down for the night in some generic four-square room before hacking around a city on well-advertised tourist tracks?

The Bogota is about to close. The owner can’t pay the new Ku’damm rents. So I paid my farewell visit with a friend a couple of weeks ago. The cleaning staff opened a door onto one of their roomiest room: two alcove sleeping niches and a put-u-up style sofa in the salon area plus a queen size double in the bedroom. You could sleep six adults easily – enough for a small party, especially if you invited some friends round for cocktail and a knees-up Mother Brown sing-a-long on the piano standing by the window. Of course, the kind of people who stay at the Hotel Bogota can play the piano. They just can. They’re characters – straight out of the film that was being shot whilst we were there in the upstairs studio (where Helmut Newton trained under Yva). Actors were wandering around trying to keep the sandwiches out of delicate bustles and vast, bushy sideburns. It wasn’t even time travel. It was just all there, side by side in natural synchronicity.

I’ve nothing against the new Café Grosz just around the corner in Haus Cumberland. It’s smart and efficient, and does its best to replicate the Belle Epoque charm of the area’s origins. But in indigenous terms it’s more of a parrot in an English country garden, someone else’s idea of a contemporary never-never. Illusion, not memory.

My memories – and, I’m guessing those of many others – will have to find a new home now: somehow, I doubt that they’ll appreciate the move.