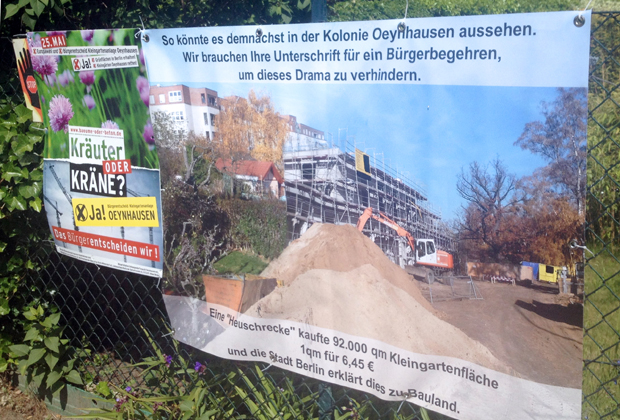 Last Sunday, whilst the rest of Europe was examining its conscience on the rise of nationalist Euro skepticism, the city of Berlin had its own Tempelhof fish to fry. Not to be outdone, Berlin West, specifically the district of Charlottenburg-Wilmersdorf had its nose (even) closer to the ground as it debated the marking of a third ballot in the election booth: on the future of a local Kleingärtenkolonie – allotments nominally set aside for the cultivation of fruit, veg and flowers but actually featuring a variety of rigorously fenced-in, home-grown, dacha style bungalows.

About two thirds of the allotment territory (previously owned by Deutsche Post) had been sold to the big bad wolf of US backed Luxemburg-based enterprise for a pittance of roughly €6.50 per square meter. Now said company wants to build (all together now) “luxury flats” on land acquired as non-developable, leaving only one third of the space previously available as potential homes for runner beans, aspidistras, plastic ducks – and possibly Russian oligarchs (dacha, anyone?) According to disinformation put out by the SPD/Greens-run local council, there’d be millions to pay in terms of compensation if the big bad development wolf didn’t get his way.

An unlikely alliance of CDU/Die Piraten rallied the voters and for the time being at least, the Kleingärten are safe. The ongoing saga of large-scale business machinations versus grass-roots-small-is-beautiful-anti-capitalist-anti-elitism…

Although, let’s back up there for a moment. I’ve always wanted an allotment. I asked for one when we first moved to Berlin. I asked again recently when I visited said Kleingärtenkolonie Oeynhausen. I was directed to the website, where a total of eight downloads are waiting to measure applicant eligibility and/or framework conditions. Thereafter, it’s up to the applicant to check on the status of his/her application “once a year.” And yet, there are over 1000 applicants on the list.

I’m sensing a hidden agenda here: a devotion to some strange agglomerate of small print and small gardens that transcends political boundaries, reaching deep into the heart of an atavistic hunter and gatherer bourgeoisie.

There’s only one way forward. And it involves that other empty space in Berlin. That former airfield, largish. Currently in thrall to heated public debate and crying out for the obvious solution: market gardening for the masses.

And let’s not keep it simple. In fact, here are some suggestions that should satisfy both the gardener and the bureaucrat.