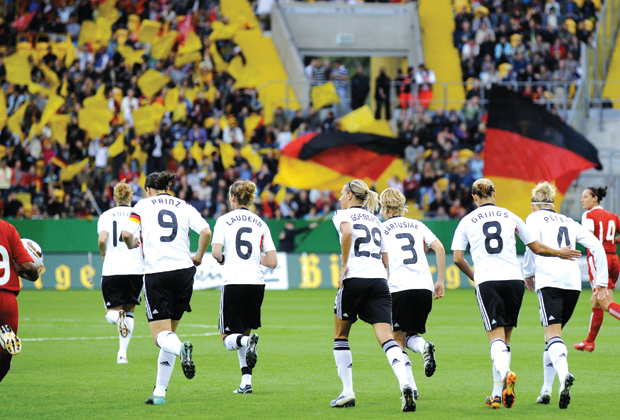 So what can we expect to see from the host nation, the team that has won the last two tournaments and become the dominant force in the European game? Under the watchful gaze of Silvia Neid – herself a player of great repute who represented her country in two World Cups and has been involved in all seven of the team’s European victories, either as player or manager – Die Mädchen have strengthened their grip on the world stage.

But to do what no men’s side has done before and win a third World Cup on the bounce is no easy task. What Germany will need to ensure that success is exactly what has kept them so buoyant in the past: continuity, experience and a smattering of youthful flair and exuberance.

On the experience end of the spectrum is captain Birgit Prinz, three-time World Player of the Year, who will lift the trophy in her home city of Frankfurt, along with goalkeeper Nadine Angerer. Meanwhile it’s easy to forget that this year’s World Player runner-up, Lira Bajramaj, is still only 23. By the time you read this, the superbly skillful and flowing midfielder should have just retained her Champions League crown with her Turbine Potsdam teammates.

Duisburg‘s Alexandra Popp, the named successor to Prinz, is making a big impact on the team. She scored 10 goals in their defence of the Under-20 title last summer, despite the fact that in club football she is regularly used as a defender. Grings, another national mainstay, is ahead of her in the pecking order as a striker – as she is in Duisburg, but that didn’t stop Popp from scoring 15 goals in the Bundesliga and winning the vote as the fans’ player of the year.

The German team comfortably beat both group stage opponents, Canada 4-0 and Nigeria 8-0 last year. France shouldn‘t cause too many problems, but a 4-0 loss to the USA in Cleveland will hurt, and Die Mädchen know that at some point they will have to overcome them to make real footballing history.