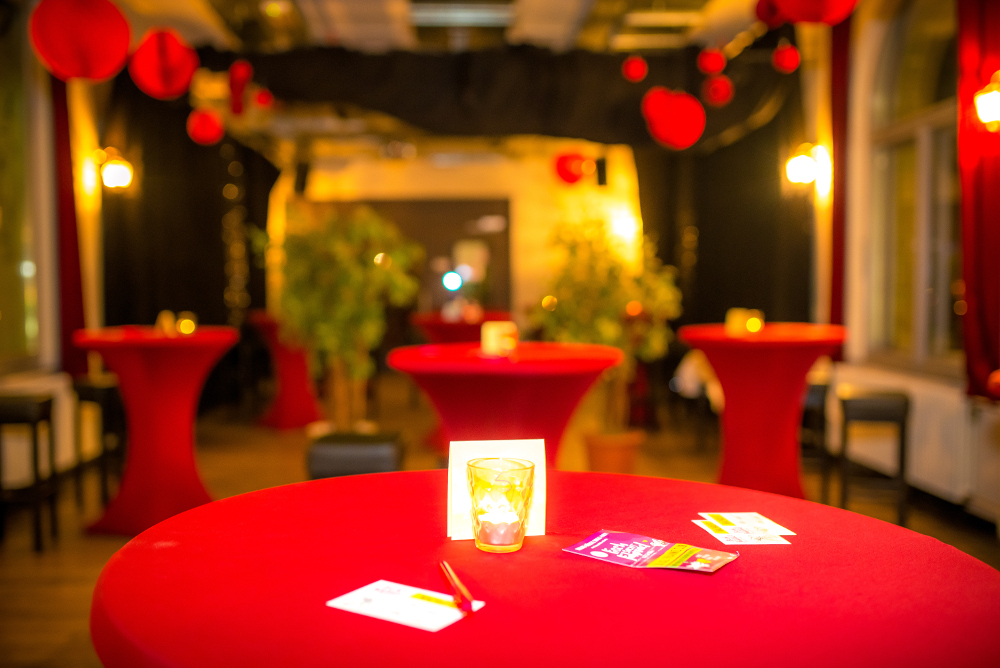 Tired of Tinder? Ground down by Grindr? You’re not alone. Amy Leonard switched off her phone and waded into the world of matchmaking, speed dating and singles’ parties.

Though reluctant to affiliate myself with the word, I am a millennial. So when I hear of people “putting themselves out there” on the dating scene, I imagine they’ve downloaded a couple more apps or created a few new profiles. And it’s not just me (honestly, I’ve asked around). To us, dating is digital. Ever since the launch of Match.com in 1995, searching for a soul mate has become increasingly cybernated. Germany, in fact, is home to 17 percent of the world’s adults who pay for an online dating service – the third largest proportion behind the USA and the UK – and just think how many more are using free versions. With the revenue for the ‘Online Dating’ sector here in Germany currently at approximately €215 million, it looks like we’re set to continue relying on virtual meetings to quench our desires for love or lust.

But personally, I’m sick of the app-scapades. The last time I used Tinder I had exchanges with two guys, one of whom straight-up asked to meet for sex, and the other of whom spent 10 minutes telling an elaborate joke that ended in “Because your pussy’s getting smashed tonight.” What happened to “stepping out”, to good old courtship? Surely an actual person is better than a profile? Determined to prove that there is more to love than swiping even for us trendy app-dicts, I decided to venture into the alien world of analogue dating.

Where better to start than with an expert? A quick Google for matchmakers in Berlin presented me with Talya Shoup, 38. Earlier this year, Shoup founded Berlin Matchmaker, a “boutique dating agency” that offers personalised matchmaking and dating coaching.

Rather disappointingly, I met her in a café in Mitte. I’d had the vague notion of a plush, pink office with a chaise longue overladen with cushions, but it turned out Shoup works from home and meets clients in “neutral spaces”. I could see why people trust her with their love lives. She is what I would describe as very American: blonde, blue eyes, great teeth, warm and friendly attitude, dressed with preppy elegance in a pink button-up shirt and dark blue jeans tucked into brown equestrian boots. Of course I’d cycled through a muddy park on the way and the lower half of my jeans was covered in dirt as opposed to expensive-looking leather. Great start.

Shoup told me she’d moved to Berlin from the state of Georgia in 2010 with her then-husband and three children. After her marriage split, she’d tried her luck with the Berlin dating scene, only to find out what Exberliner had already discovered in our June 2014 “Loveless” issue: “It’s like a zoo, or a circus! It’s this sort of Peter Pan Never Land where it’s easy to make casual connections but finding something deeper is much more difficult.” And going online didn’t help. “I did meet one nice guy on Tinder – he seemed good on paper, but in real life it just didn’t work.” Later, working in recruitment for tech companies, she was astounded at how many other “great singles were fumbling in the dating darkness”. She decided to use her experience and become a “dating headhunter”.

Her method is as old school as you can get: no algorithms, no tricks, just plain old intuition. The first meeting involves an hourlong discussion of what the client wants. She lists the most common topics as “personal background – have they got kids or been married before; education; religion; age; language.” She uses her contacts to put out feelers, meets with potentials to pre-screen them, and finally sets the pair up on a date. The whole process can take two to four weeks. What if she doesn’t succeed? You won’t get your money back, but with the option of paying monthly, you can call it quits whenever you want.

Her top dating tip for her male clients? ‘Wear a button-up shirt, definitely, and pay for the date. It’s old-fashioned, but it works.’

Unfortunately, I didn’t have weeks’ worth of time to get set up. Plus I’m not sure Shoup’s ideas and mine would exactly match. In the year since she’s been doing this she’s worked with six clients, all of whom were middle-aged American or non- German European men. With prices starting at €300 per month, she’s mostly targeting busy professionals that have cash to spare. Her top dating tip for her male clients? “Wear a button-up shirt, definitely, and pay for the date. It’s old-fashioned, but it works.” Obviously, this service isn’t for the average Berliner.

I can’t say I felt any more prepared to head out in search of a soul mate after that, but I did nonetheless. Next on the list: speed dating. At Shoup’s advice, I checked out DateYork (next Berlin round is February 18), a Stuttgart-based company that organises supposedly regular speed dating events all over Germany for €19 a head. A cold, wet Sunday night was not the best prelude to a night of romance. Nor was the restaurant I arrived at, a tacky and uninviting faux-Mexican number. Alas, it was not to be; the event had been cancelled. Apparently adverse weather is enough to keep Berlin’s lonely hearts in the comfort of their homes. Back to the bus then, and the drawing board. I got knocked down, but I got up again.

The wristband announced my intentions to the rest of the revellers: green for open to flirting, blue for seeing what happens or red for, well, DTF.

Dressed to impress, I headed to a Friday night singles’ party called Topf sucht Deckel at Pirates Berlin, a hostel by Oberbaumbrücke. After being greeted by two ladies dressed as an angel and a devil, I was dismayed to see a mostly empty room. “It’ll pick up later,” the hostesses assured me as they handed me a big numbered heart and a coloured wristband. The number on my heart meant that people could leave messages for me if I took their fancy. The wristband announced my intentions to the rest of the revellers: green for open to flirting, blue for seeing what happens or red for, well, DTF.

Eventually, numbers did swell, though not with the tightly-clad bros and dolled-up girls you’d imagine at a touristy hostel. I saw people of all styles, shapes and sizes, including one guy resembling a hunky Pirates mascot and a creepy-looking sixtysomething in a black and red leather jacket. Standing alone at the bar, I realised how vulnerable I felt. When I said I was going analogue, I went the whole way: my phone was turned off and only for use in emergencies. I couldn’t stifle the awkwardness I felt by scrolling through whatever I could find. My innocently green glowing wristband indicated I was open to flirting, but my anxiety levels suggested I wasn’t.

Eventually, someone took pity on me, a bald gentleman in his forties who was there with a group of people he had met on Spontact. Grateful for his insistence that I couldn’t sit alone, I joined the ragtag bunch of mainly nerdy-looking guys. One of the only two girls there, a Spandau resident who looked a lot older than her 22 years, began questioning me aggressively, and it quickly became apparent that I was muscling in on her turf. I hit the dance floor instead.

After a few drinks, tossing my hair, smiling and doing the things you’re supposed to do when ‘flirting’ IRL, I went to check if anyone had left a message for me. They hadn’t. I partook in a ridiculous 90-second speed dating round, where I made perfunctory small talk with a 19-year-old geography student, a 42-year-old roofer, a 28-year-old Edeka shelf stacker, and a random collection of other German men. I left with one phone number, reluctantly taken after a 45-year-old lawyer cornered me to tell me about his dreams of being a musician, or a politician.

The only people I saw leaving together were two guys, one of whom looked like he was about to vomit. When I picked up my coat from the cloakroom, the woman who had been sitting next to me during the speed dating round grabbed my arm and asked me with desperation in her eyes if I had “found someone”. No, I had not.

Not yet despondent, I thought I’d make one more attempt. After searching the Berlin.de site under “Singles Parties”, I came across an event at Clärchens Ballhaus called Schwoof; yes, I know, times had gotten tough. Set back off the street, the charmingly decrepit building has a natural air of romance as you walk through the tree-lined courtyard. Upon entry, however, I was confused by the children, parents and even grandparents on the dance floor. There was a 50th birthday and an 80th and everyone was giving their all to the likes of “Thriller” and “Bohemian Rhapsody”. I asked the bar staff if this was Schwoof and they said yes. I asked them if it was a singles party and they looked baffled. Turns out Berlin. de got it wrong. But I didn’t leave; in fact, I stayed for an hour because the place was just so fun. Everyone was having such a good time and the atmosphere would have easily cleared any heartache, if I’d had any after my fruitless adventures.

And that’s what stood out for me. What makes face-to-face dating better than OKCupid and its equivalents? It’s an actual experience! It’s not a brief chat that’s over before it begins and is forgotten minutes later when the next one starts. With more and more Gen-Y millenials going cold turkey from social media, there must be some sort of resurgence in face-to-face flirting?

I rang up the organiser of the one singles’ party I hadn’t made it to, Fisch sucht Fahrrad (next one is March 9; photo). In April 2016, Wolfram von Dobschütz took over the monthly event from Tip magazine, who’d been running it since 1994, and moved it to Frannz Club in the Kulturbrauerei. Von Dobschütz says his crowd numbers in the hundreds, with guests varying from early twenties to mid-fifties (the average age is about 35). He believes his guests are sick of online dating. “The movement seems to be going back to more traditional ways of meeting people. Offline, you don’t have to pay for a membership, or scroll through gazillions of photoshopped ‘my six-pack at the beach’ pictures, or read stupid life mottos.”

Whilst I didn’t find a suitor, I’d at least had fun. Stepping out from behind your screen and going to places and things you thought would be too cringe-inducing to bear: now that’s really putting yourself out there. If more of us realised that, I think Von Dobschütz’s prognosis might just come true.

A few days after my analogue odyssey, I was chatted up on the U-Bahn by an actually decent man. See? There’s life beyond the keyboard. Release the back-app-lash!