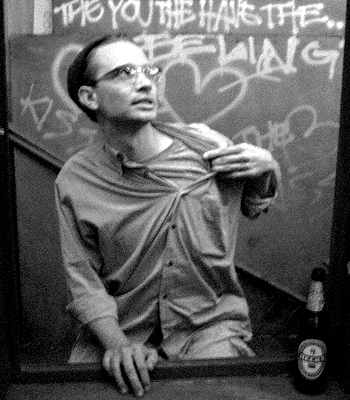 The American poet Michael Haeflinger moved from Chicago to Berlin two years ago – just in time to join the boom of English spoken-word happenings. He and his fellow rhyme-spilling renegades have now taken to assaulting unguarded microphones in Kreuzkölln with their hilarious, language-crossing routines.

And Haeflinger doesn’t just write and perform his poetry – he’s also the organizer of New Word Order, Mano Café’s open mic night for hopefuls with the necessary amount of wit and/or alcohol in their bloodstreams.

Do you consider yourself more of a written or a spoken word type?

It all kinda goes together for me. In the States, this conversation has been going on for ages: page or stage, academic or street poetry. Who holds the key to the gate of poetry? People think that there is such a thing, which creates an environment of resentment. I try to sneak in between the two of them as much as I can. Poetry is a plural world in my mind; it’s a million different things.

So, you can’t define your style…

Not really. I’m influenced by poets from the twentieth and twenty-first centuries, though I don’t go to the classical rhyming forms. I write narrative, descriptive poems that play with metaphors and imagery.

The Berlin spoken word/poetry scene seems pretty vibrant. Many artists on the local circuit have started organizing regular events – not a week goes by without an expat poetry night somewhere or other…

Lady Gaby has been doing stuff here for a long time. Fuel’s been around for about four years now. Another event called Beat Street started at about the time I came here. I met Paula [Varjack] about a year ago; she’s been organizing a lot. The Ackerslam is relatively new, the Mano Slam as well. Way before that, there was Bordercrossing from about 2002 to 2006. Then Gaby went off to do stuff at the S.I.N. bar. Last spring, you would have an event every week, then the summer came and everyone went on vacation. Let’s see what the next year brings.

What is the concept behind New Word Order?

It’s an open mic event, which I love. It’s like the epitome of democratic spaces. Once we had a comedian doing an impression of George Bush doing yoga; another night, we had four Italian teenagers doing a medley of Italian pop songs. So it’s like: “Here’s your five minutes, do whatever you like!”

Is the Berlin scene competitive?

If it is competitive, then not outwardly so – or maybe someone could be silently conspiring, but I don’t get that sense at all. People are willing to work together. If you are working in English, you have a limited variety of opportunities. I tell people that English is sort of the first-and-a-half language in Berlin. It’s not second because Germans usually speak it pretty well – a good part of the audience is German, so from that position you are able to draw different types of folks to gigs. But, on the other hand, it’s sort of restrictive because we don’t have access to the funding that almost only supports the native writers. We are straddling this line between accepted and rejected.