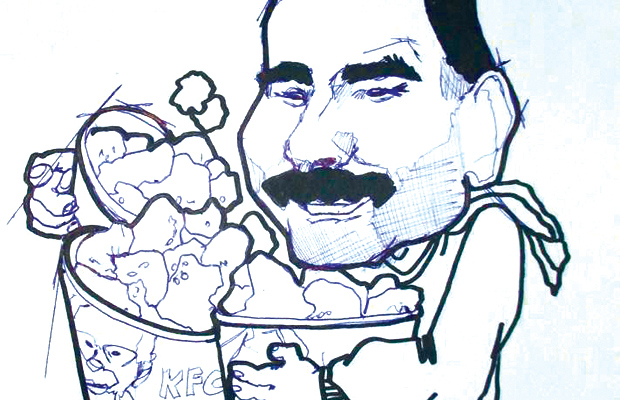 Last night was a memorable one. My first night out after three weeks of slaving away in a call center and observing a heathen’s lent among other thrifty forms of abstinence (from booze to cigarettes) motivated by a severe cash deficit and my landlord’s ensuing acrimony.

It was Saturday, my rent was finally paid (up till last month), I had recovered my preteen waistline and I was ready to catch up on all those sinful nocturnal pleasures that had been denied to me. A quick review of my wallet: besides the usual safety pins, tobacco-covered gum and condoms, I found nothing but a lonely, pathetic, precious €1 coin.

WTF, the night would be mine, no matter what it takes (NMWIT).

I find the motivation to pull myself away from yet another viewing of Death Becomes Her after finding a half-full bottle of Serge Morin (€1.99, Netto) hidden cleverly on top of the refrigerator. I promptly pour it into a sexy, vintage Club Mate bottle and shove it in my bag.

I desperately needed to get a few confidence drinks into my system, and studies have proven that you shouldn’t refill plastic bottles (something about causing STDs in lab rats). Ten cents at a Späti for some sour gum and I head to the U8.

I get to Heartbreaker, where a friend who is having some technical difficulties in the digestive area is DJing. I keep asking the bartender for drinks for “the artist”, then drink them myself since he can’t handle much aside from rice anyway. The bartender sees this, it gets awkward, I leave.

Energy: Getting there Funds: 90 cents

A friend calls and tells me about a birthday party at a beer garden in Victoria Park called Golgatha so, running about five hours late, I head over. I’m greeted with a free drink token, so I get a beer and sit on some couches with the last of the birthday group.

On the table in front of me is a completely unattended bowl of noodle salad, presumably left over from dinner. Lent is good for the wallet and the soul, but has left my stomach screaming, so I make the executive decision to eat – as slyly as possible. As the birthday girl comes up and gives me the last piece of ridiculously dank-ass chocolate cake, I watch the fateful words come out of her mouth in School House Rock-style lettering: ‘’Hey, who ate my noodle salad?’’

Shit. I beeline it to the counter, where I offer to sing a song for the bartenders in exchange for a beer. Somehow unsurprisingly, they request “I Will Always Love You” by Whitney for a very young co-worker just hanging around for the night. He’s pretty cute but makes me feel like a cradle robber when he smiles, so I sing the song and march back to the dance floor with my beer.

A minute later, I turn around to find my Knight in Shining Baby Clothes holding a vodka shot for me. We drink them and talk while I smoke his cigarettes and he buys me beer, until the point when I know I’m not only bored but getting drunk. Before leaving, I help clean up and in return receive €4.50 for Pfand. Sweet.

By this time I’m mad hungry again, so after buying an 80 cent (ehhem, overpriced) Sterni, I walk through the glorious intersection of Curry 36 and Mustafas Gemüse Kebap at Mehringdamm. Maybe it’s because I’m Indian, maybe it’s because I was raised in Alabama, but I always hated the idea of curry ketchup, so I just ask some strangers for a fry.

I’m trying to decide whether to spend some of my Pfand earnings on a proper meal, when I spot something extraordinary. Is it a mirage? No, it’s a tiny Turkish man holding six family-sized buckets of KFC. He takes some convincing, but after a little walk in which I make an assortment of seductive advances and erroneous claims (It’s my birthday! I have polio!), he slowly and somewhat reluctantly unveils the Holy Grail of the Colonel’s goodness, hands me a bucket and jumps on the train.

There I am with one napkin, swimming in chicken skin and suggestively (albeit unknowingly) licking my lips when some 18-year-old boys spot me. Suddenly, I am no longer the girl with a questionable scent who enjoys reading on the toilet and has never had a nosebleed; I am a mysterious, grease-covered woman of the night with glazed eyes and a totally bangin’ family-sized bucket of KFC.

Energy: Skyrocketing Funds: Whatever €5.50 minus a beer is, plus a bucket of chicken

I decide to skip (forever) My Name is Barbarella, not only because of the bouncer, who repeatedly refers to me as “my love” in a tone of voice that leaves me wondering when he will ask me for a steak and a blow job, but also because of the €7 cover charge on which the owner/ ill-defined authority figure will not fold.

I arrive at Milchbar, and walk around looking for half-drunk beers. I know what you’re thinking, but don’t worry: I haven’t washed my hands in several weeks to build up my immune system and my experience has taught me that I am invulnerable to roofies. Two half-beers drunker, I sit next to a man who’s rolled approximately four dozen cigarettes.

After I compliment him on his skillful handiwork, he buys me a ‘Mexicana’ shot and a beer, leaving me with the assessment that Bloody Marys are even better in a smaller, more powerful form. The bartender lets me make drunken, batty eyes at him and delivers my cigarette-rolling 40-something friend and me another shot, on the house. It’s 5am. Time to go.

I jump on the U-Bahn and immediately ask the babbling Turkish guy next to me if he’s slightly retarded or just drunk, to which he replies “a little bit of both.” Me too, buddy. Me too.