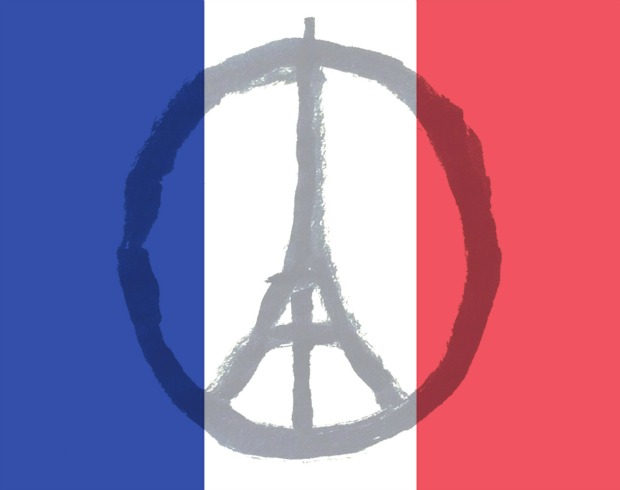 Our Paris-born editor, Nadja Vancauwenberghe, on why she won’t put a French flag or an Eiffel Tower-shaped peace sign on her Facebook profile.

On Friday night, like most French Berliners, I heard about the news of the terrorist attack with dismay, shock and worry. I’m a born Parisian, and many friends and family members live in the eastern part of the city where most of the attacks took place. After I found out everyone was safe, I nonetheless spent a sleepless night listening to live reports in a febrile state. Initial worry slowly gave way to profound affliction and a deep sadness. I guess I did feel French – in the way I identified with a city where I lived for many years and where people I know and love still live.

But did I feel I had to express it with a tricolour flag or an Eiffel Tower? No.

Worse: the growing display of these gimmicky visuals threw me into a state of further affliction. What did they mean? What do they stand for? Empathy? Solidarity? It’s nice to see London’s Tower Bridge and the Brandenburg Gate lit up in blue, white and red. It’s a nice gesture. So is the foreign media’s attempt to show solidarity with too many columns of empty reports and oversized reproductions of the aforementioned logos on their front pages. That my German, Russian or American Facebook friends use ‘our flag’ to show compassion – so be it. But why would French Facebookers need to display the Tricolore on their profile? Isn’t it enough to be French? Isn’t it obvious enough that we care, and feel scared, and bad and sorry? In the current political atmosphere – with upcoming elections expected to land Marine Le Pen her first regional constituency – such a redundant display of national emotions feels unsavoury. Do we need to throw more Bleu Blanc Rouge (already highly associated with Front National pathos) into the political fire?

French politicians were quick to call for more police, stricter border controls and heightened security measures as a whole. What’s next? Probably more money spent on curtailing privacy and closing our borders to immigrants; less of everything else. And luckily for the security-mongers, they found a Syrian passport on one of the suicide attackers, who apparently had transited through Greece like most of those refugees we’ve been asked to shelter within our borders. The enemies of Willkommenskultur couldn’t dream of a better scenario. Who benefits from the crime? On the domestic scene it’s clear: Sarkozy’s hard right and Le Pen’s radical right. Because they were both “right”: They always told us that a hard stance on security and crime – both in terms of prevention and punishment – had to come first. And that Muslim refugees are potentially dangerous .

There’s another reason why I don’t like that flag. When I emerged from my sleepless night on Saturday morning, still high on breaking news and adrenaline-inducing live media, I immediately bumped into Rasha, the young Syrian woman who is currently living in my flat. “Did you hear about Paris?” I guess I needed compassion and commiseration, and she said something about how horrible and how sorry she felt. But then: “The same just happened in my city, did you hear…?” As I must have looked slightly puzzled, she planted her oversized smartphone in my hands and played a Youtube video showing some horrendous bloodbath. It was in Arabic and I couldn’t understand much – but clearly there’d been a terrorist attack and people were running around to help the many victims, mostly young people. “Many people died – many were students. The bomb went off near the university, right next to my parents’ house…” After awkwardly expressing my belated sympathy, I rushed to my laptop to find out more – how come I didn’t hear about this? It did take some effort to track down the info in a language I understood, as it was mostly in Arabic. Eventually my Russian came in handy to read about an Al-Nusra Front attack in Latakia, Rasha’s hometown, that took place only two days before Paris’ Black Friday.

I knew many events get under-reported and many others under-noticed by the rushed reader. But here, it was a case of quasi-blackout. Not only because the victims were far away, but because they’re on the wrong side of the political spectrum: Latakia is widely dismissed in Western media as “Assad’s stronghold”, protected by the Russians. Syrians who live there are mostly of the Alevite Shiite minority (like the Assad clan) and haven’t been directly confronted with the war yet. Like in Paris, when there’s a bomb there, it’s a terrorist attack. But we didn’t hear about them because they’re “bad” victims of the same terrorism. Beyond the moral failure here, the journalist in me was scandalised. I felt ashamed of my ignorance. My feelings towards the French flag logo went from uneasiness to embarrassment. Funnily enough, many of Rasha’s friends had added a French flag to their status – surely they knew about our tragedy. And as fellow victims of ISIS, they were expressing compassion.

On Saturday night I vented on my Facebook wall: “ I’m sooo sick of cheesy, sappy pictures and tricolour filters and iconic logos à la Je suis Charlie …” It angered some of my real friends, although many ‘friends’ liked it. I’m not entirely sure what their motives might be for that, and suspect I would disagree with some of them. But that’s one of the many joys of Facebook: you end up falling out with friends who actually agree with you over a stupid post, and get ‘liked’ by ‘friends’ you’d actually rather never meet in real life for a statement they probably misunderstood.

The thing is, back in January, I was among the very first ones to post a “Je suis Charlie” logo on my profile. Somehow the rallying slogan that mushroomed on social media following the murder of the French cartoonists – only a few streets away from one of Friday’s shootings in the 11th arrondissement – felt more meaningful (before it got so overhyped that it became a fashion accessory or storefront display). Back then I stood for a universal principal that some argued with: freedom of expression for political cartoonists, wherever they are, whoever they are and no matter how provoked one might feel by their sketches. Many debated this, and some didn’t see the cartoonists who died as totally innocent. I did. My “Je suis Charlie” stood for a conviction that was far from consensual, especially among my American colleagues and friends. But what are we supposed to stand for now? The right for innocent French people not to be killed by terrorists? Well, I don’t feel the urge to express my feelings on that!

What happened last Friday in Paris is deeply shocking and extremely sad. What’s sadder is to think that it’s what many people in Syria, Lebanon, Pakistan and Iraq are confronted with on a regular basis. I wish the emotional impact of these terrorist attacks at our doorstep brought us one step closer to those that get under-reported (Beirut on Thursday) and those that hardly get reported on at all (Latakia on Wednesday). I don’t feel that resorting to my national flag will help. As I observed a minute of silence for Paris at noon today, my thoughts were for the victims. I also thought about how miserable and sad the world we live in is, and I felt sorry for my daughter.

And speaking of my daughter: A WhatsApp message went around over the weekend urging everyone to come to her French school dressed in black today. After all that blue-white-red, black felt so much more appropriate!