Whether you want to save the planet, some refugees or your abs, here’s how to stick to your Berlin resolutions this year. Waste down You fancy yourself an earth-saving angel with your endless supply of glass jars and regular trips to packaging-free shopping mecca Original Unverpackt. But you’ve got a dirty secret: a rubbish bin brimming with used tampons, takeout containers and to-go cups. Time to level up! First up, Other Nature stocks reusable products for period-havers of all genders, like cotton panty liners and pads from German company Kulmine (€13-20) or the flow-collecting silicone Ruby Cup (€31), which’ll last you 10 years if you don’t mind the awkwardness of emptying it out. The Tiffin Project wants to solve your takeout problem via a heavyish four-level stainless steel tin, to be filled with lunch at one of nine Berlin restaurants and returned within one month (or kept for €30). All those compartments of the tin only really make sense for Indian food, though your options in that area are limited to the sorta-Indian Dabbawalla and Tschüsch (they have three smaller versions of the circular lunchbox, as well). So you might be excused if you pass on this one in favour of good old Tupperware. More practical and a must for coffee drinkers is Just Swap It, which offers bamboo to-go cups with silicone lids at 19 cafés, mostly in Neukölln and Kreuzberg. Both cuter and lighter than most clunky travel cups we’ve seen, they’re well worth the €4 deposit. Bring yours back for a fresh cup of joe, or keep it to show off at the office – you just might guilt trip your co-workers into following in your sustainable footsteps. -KR Kick your German up a notch 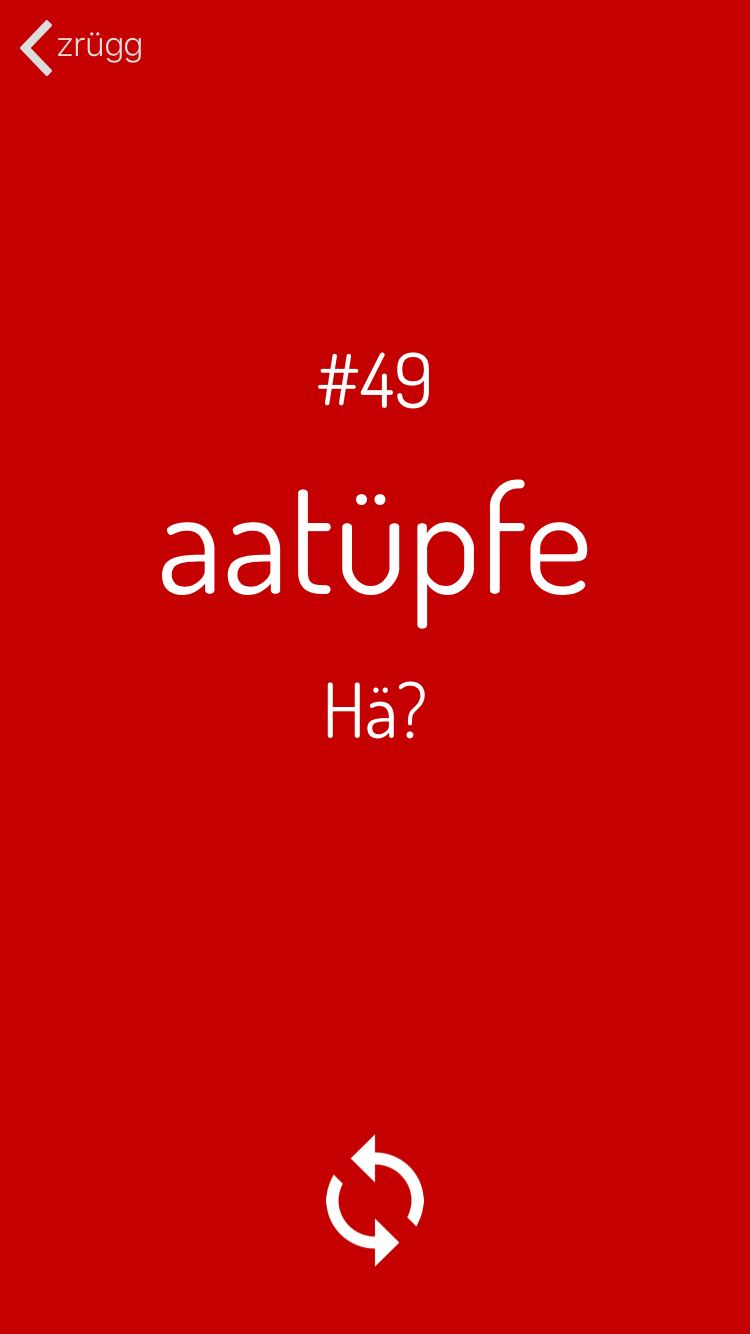 You can watch German movies without subtitles and argue with your Berliner flatmate about the Putzplan with confidence, but your Deutsch has hit a serious plateau over the past year. You need to start thinking outside the box… what about German sign language, for instance? You’ll find classes taught by friendly deaf or hard-of-hearing teachers at the Gebärdenfabrik, a grey Plattenbau in Marzahn that’s a straight shot with the M8 tram. Each hand gesture and facial expression is illustrated in writing, so, as well as being able to communicate with hearing-impaired people all over Germany, you’ll also expand your vocab. You might also make some new friends, even  if you’re just there for a free introduction – participants, many of whom sign up fora €1780 year-long course in preparation for deaf studies at HU, are on the young and smiley side. If it’s those harsh northern pronunciations that are holding you back, take a trip into the adorable world of Schwitzerdütsch. The free Swiss German app Bärndütsch includes audio for all the declinations, conjugations and vocabulary words it teaches, so load it up and prepare for some odd stares on the U-Bahn as you mouth words like hoi (“hello”) and exgüsee (“excuse me”) in Bern dialect. -JA Get fit, not bored Admit it, your jogging plan is not going to hold up in this weather. For those who can barely run ‘round the block but have no trouble with a 12-hour stint at Kater Blau, Becycle (Brunnenstr. 171, Mitte) offers gruelling English-language spin classes amid flashing coloured lights and local DJs. At €23 per 45-minute “Ride”, the demo skews more towards yuppies and yummy mummies than your average club crowd (you’ll find those folks at McFit’s new millennially-marketed John Reed gyms), but you’ll get a real, live, possibly Australian trainer shouting positive encouragement, if you can hear her over the pounding beats. Make sure you bring a water bottle, as the single fountain of hormone-free filtered water in the antique brass-plated wall gets crowded at peak times. Men, if spinning doesn’t get you wet enough, what about underwater rugby? Berlin’s burly BUR (Berliner Unterwasser Rugby e.V.) team is looking for new members who can handle German under pressure (and underwater) and are free to travel to tournaments. If you’re more interested in stretching and toning than bashing and splashing, Internationale Varieté Akademie Berlin offers a wide range of aerial gymnastic and pole dancing courses (€18-22) for would-be circus artists and empowered strippers. But if you’d rather ease into your fitness regime more gently and earn German integration points while you’re at it, there’s Naturfreunde Berlin e.V., a non-profit that offers a weekly Nordic walk through Grunewald every Sunday at 9:30am. -JA Express yourself No more being a wallflower – this year is for losing your inhibitions and coming out of your shell. First, practice talking to strangers at the Neukölln “dating show” So This One Time (Jan 14, Kleinod), where there’s a good chance host Rachman Blake will drag you onstage to answer questions about your love life as Berlin comedians dish on their own dating experiences. If that gives you the acting bug, sign up for the eight-week beginner improv course at Comedy Cafe Berlin (Mondays or Fridays, €125), where you’ll learn the art of “Yes, and…” from professionals and put on a group show in front of a live audience. Then again, perhaps it’s your body you’d rather improvise with. Unleash your inner beast at one of Berlin’s Playfighting clubs (weekly at Osho Mauz in Kreuzberg, €5-15; monthly at Kampfkunstschule Neukölln, €5). Don’t think Brad Pitt, but more of a way to safely tangle bodies with people of all sizes, weights and genders. You make eye contact with and/or growl at your chosen opponent before engaging in six minutes of pushing, chestsitting and headlocks (no punching or kicking) on protective mats. Finally, unite body and mind at the “New Civilisation Training” (Mar 31- Apr 9), hosted by the mindful (s)explorers of Berlin’s former Schwelle7 centre: an intense 10days of juice fasts, yoga, singing and sexuality workshops in a lakeside “contemporary monastery” 100km north of the city (€650, more info at felixruckert.de). -SB Do some good, for once You’ve overindulged in all kinds of substances, spent too much on plane tickets and decadent parties and now you’re entering the New Year steeped in guilt. Everyone knows helping out refugees is a sure fire shortcut to soul-cleansing, so if you’ve got some transferable skills (being able to open a beer with your teeth doesn’t count) you can sign up with the organisation SingaBerlin to mentor someone who left their job behind. Singa also offers opportunities for the bureaucratically-savvy to accompany refugees to the Bürgeramt for the dreaded registration process. For female empowerment, you can join one of Berlin’s two rival factions of bicycle lessons for refugee women: Bikeygees, which holds training sessions every third Sunday afternoon at Jugendverkehrsschule Wassertorplatz with classes on bike repair or traffic rules if the weather’s too wintry, or Cycling Lessons for Ladies, held by ex-Bikeygees co-founder Katie Griggs at Gleisdreieck Park once a month from late February on. More hardcore cycling action can be found with Radeln ohne Alter, where you take an elderly or disabled Berliner out for a joyride in a rickshaw, giving them (and you) some much-needed fresh air. If none of this strikes your fancy, new options keep popping up on vostel.de and givesomethingbacktoberlin.com. All you need is an open heart and enough shame to get you motivated. –PK