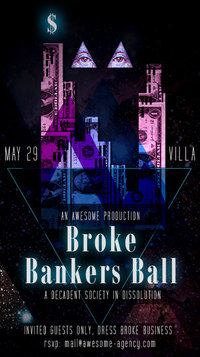 YOUR WEEKEND: As I make it a point not to attend events I have to pay for, it’s uncertain how the economic downturn has affected Berlin nightlife, though it does appear that the last couple of years have seen an equation of decadence with cash flow previously underexplored in this city.

One of the beauties of human nature is that even Donald Trump thinks he doesn’t have enough cash to satisfy himself, and it would surprise me if some of the attendees of the BROKE BANKERS BALL (Sat, May 29 @Villa), dressed in their Weekend finery, won’t be taking it more than a bit seriously. There are a slew of DJs all operating under pseudonyms, such as The Richest Boy Alive, Suz Savings and Hugo Sanchez, and one wonders if the names have been chosen to suggest a greater reputation than the participants merit. Which is the essence of Capitalism! This is supposed to be a private event but, Berlin being Berlin, there will be tickets at the door as, unlike Capitalism, we have long ceased operating under the umbrella of a closed system.

And, like Capitalism, old disco acts always risk rising again. BLACK DEVIL DISCO CLUB (Sat, May 29 @ .HBC) was never really disco, per se: even over 30 years ago they were weird, even for that weirdest of pop genres. With the exception of library music, which paid their bills, as well. Their recent resurrection appears to currently include both original members and, being timely, atmospheric and off-center, their time has come again. LIGHT ASYLUM (Sat, May 29 @.HBC), currently opening for CocoRosie, is also on the bill, which should increase the hippies-going-sour-as-the-1970s-end vibe to the proceeding. The financial collapse wasn’t society’s first bringdown.

When you hit rock bottom, one always has drone to mimic the inner life, and what may be drone’s greatest practitioner, RAFAEL TORAL, evidently unphased by potential competition, shall be conducting a series of workshops and performances (Thu, May 27 – Sun, May 30 @N.K.) centered around his Space Program project, which sounds like he’s attempting to transform into the next Black Devil Disco Club. Comedown eras always need their soundtracks, drones and demons. The again, doesn’t Eurovision provide all that? Whether it’s a workshop or an Israeli transvestite, we’re doing our best to seed the disappointment of the next generation.