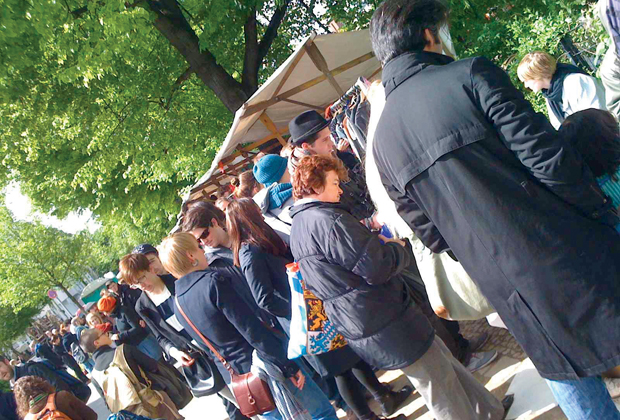 When the “Nowkoelln Flowmarkt” on the banks of the Spree in northern Neukölln (NoNeu- Ko?) made its debut, several blogs made fun of its Denglish, hippy-ish name (Buddhist beliefs are rumoured to be widespread amongst the organising team) and launched into tirades about gentrification and how it was a foretaste of horrors to come: Prenzlauer-Berg-ization and, God forbid, parents and kids.

The Flohmarkt’s opening last month certainly showed it to be a hipster market – a mini Mauerpark without the park, if you like. There were arty bands, curry from the Kreuzberg Jamaican restaurant Rosa Caleta, organic beer, families of dancing children and their joint-smoking parents… There goes the neighbourhood!

Despite iffy weather, thousands of visitors “flowed” through the single corridor of 100 stalls along the Landwehrkanal, browsing through second-hand hipster paraphernalia, hand-made wares from cushions to cake to jewellery, and the occasional designer item.

There’s no doubt markets like these are good for the neighbourhood economy: the surrounding bars and ice-cream parlours were cashing in on the spillover. And with the weekly Turkish market, the monthly Sideseeing fashion and design market, and now this monthly flea market, Maybachufer is becoming quite the avenue of commerce.