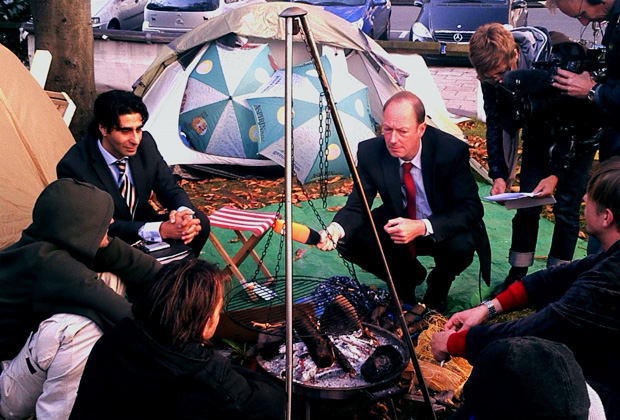 When I heard that the Occupy Berlin campers had pitched their tents in the churchyard of the Lutheran Parochialkirche on Klosterstraße, that odd little historical part of Mitte behind Alexanderplatz, my reaction was: “God – pathetic. They can’t even hold on to a central symbolic spot,” like Occupy Wall Street or the London occupiers at St. Paul’s in the heart of the financial district.

“Who are these clueless people?” I thought. So I paid them a visit.

In front of the 300-year-old Baroque church were about 12 tents. A small group was huddled around a fire, where they were being interviewed by a ZDF TV journalist (with the red tie). Unsurprisingly, the journo tried to provoke the camper with silly questions like “Do you have enough to eat?”  Again and again, he asked “Why aren’t there more of you?”

Without a gram of aggression, the raspy-voiced occupier calmly responded: “You came here at 11am on Tuesday morning. People have to go to work.” He went on to explain how every Saturday they meet in front of the Reichstag to hold hands in a circle, meditate for peace and pass around a megaphone to express ideas. “It’s a symbolic act,” he went on.

“But what about the big revolution..?” the journalist banged on with faux naiveté, hoping to squeeze out a sound bite that would make the shaggy occupiers look foolish. Instead, the reporter sounded foolish…

Perhaps the most interesting thing about this little campfire huddle was the presence of the man with the striped tie on the left side of the photo. In his tailored suit and cufflinks, he looks like he stepped off the plane from the City of London. The Occupy people, at least these ones, seemed totally open to people that look different to them. He identified himself as a “managing director” of a company, and told the ZDF reporter, “I think the capitalist system has run its course.”