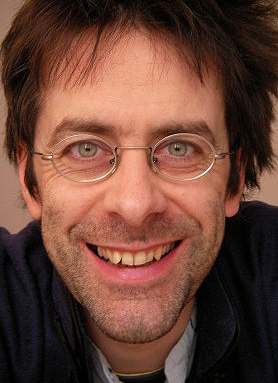 Is it free sex and chocolate that Gough promises in the title of his new book? Or demands? Is there a new brand of chocolate that I’ve missed, like dark or milk or white? Sex chocolate. Aphrodisiac chocolate? A spot of punctuation would be helpful here – yet do we really want clarity? I’m being obtuse, but you know what I mean. This is a free-for-all of meaning and choices, a place where poems drop, deceptively, like “the apple of truth”.

And what a place to be! Open the book at random and you might find the following lines: “even when our cocks are out, it’s football that we think about”. You know then that you’re in the presence of a master. Even though I suspect that I might be getting it wrong a lot of the time, really, with lines like this, does it matter?

There are constants: Gough writes of his itineraries and those of others, through towns and smudged landscapes from Prague to Berlin to Dublin. He writes of brothers, fathers, wives and daughters, about not wanting to be dead. He writes of writing, of “poetry as an affliction” – of words that will out, that must have something done to them, that continue to emerge… “like stigmata or flatulence”.

This struggle with the concept of composition, this finding of things to do with words, of loving the raw material and hating the end product – of being a carpenter who hates tables but loves trees: this is one constant.

Another constant: longing and belonging, and finding that one can engender the other. Longing to be near his daughter, Gough finds that he belongs to that most common of species: the doting father, anchored suddenly and unexpectedly. But like Leonard Cohen, whom he cites, he is wary of this particular truth, of the obvious, and envious of his daughter and her at-face-value approach to belonging. Watching her trying to climb inside a book, he describes her “at right-angles to fiction” and wanting badly to get in. A clearly defined position that we sense he misses for himself ?

For him, the lure of acceptance is a counterpoint to the artist’s instincts to keep apart. It has always been the writer’s prerogative – some would say duty – to be outside looking in. And yet still desiring a measure of commonality so that it becomes possible to share in what binds us all as friends, mothers and fathers, sons and daughters, lovers. Julian Gough manages to make us delight in both his apartness and his sameness.

‘Settled’ will likely never be an epithet that one can apply to Gough, but such is the power of these poems that the songs in the second part of the anthology, dating from the writer’s earlier life as frontman/singer/songwriter for the cult band Toasted Heretic serve wonderfully to show a backward trajectory from today’s only occasionally quiet and settled desperation to fully fledged, state-of-the-art weirdness and confusion in the late 1980s and early 1990s.

These are the sex and drugs and rock’n’roll times, the “wild wild times as what I wanted turns to what I do”. Funny: “Very broad of shoulder, slightly less of mind. Here is the boy she left behind.” Funnier: “I used to be a pseud, and whistle Mozart in the nude.”

With the requisite dash of self-irony from “the king of nursery rhymes”. And Irish. Especially Irish. It’s all there, from the paedophiles in black cassocks to the lecherous cousins and treacherous aunts of family get-togethers. If deliberate (and I doubt that it can be anything but), this inversion of development – the later poems first – brilliantly underscore a sea change in circumstance.

Back to that aphrodisiac free sex chocolate. Could it be, simply, the nonsensical spin which remains Gough’s approach to a scary world? His own, personal anchor that keeps his feet off the ground – and makes whatever he turns his hand to so frankly inimitable – or should that be inimitably Julian?