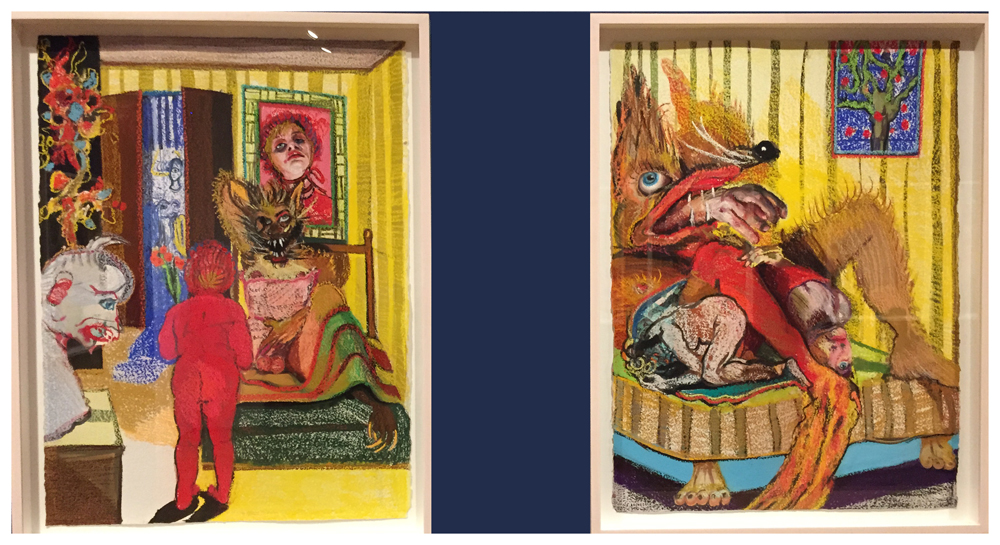 When Jacob and Wilhelm Grimm published their Children’s Fairy Tales, they had no idea that such stories as “Rapunzel,” “Hansel and Gretel,” and “Cinderella” would become the most celebrated in the world.

It is thirty-six of these well-known tales, from early editions as well as the final, seventh edition along with some of the less familiar “unsanitized “ ones that inspired New York-based artist Natalie Frank.

Made in gouache and chalk pastel—the first time that Frank has worked exclusively in this medium—the drawings are full of vitality.

Frank applies her visual and psychological acumen to the canonical literary works and what she is offering stretches far beyond the perimeters of the conventional children’s drawings. Focusing on the dialogue between flesh and spirit, the artist explores, in her own words, “the parallel poles of longing and desire but also disgust and fascination that constitute humanity.”

Take “The Little Red Cap”. Frank revisits its sweetly conventional characther and the real-but-fantasy creature. Through their grotesque and sexually graphic depiction she forces us to “to reflect on the warped manner in which we establish normal standards and practices to help us lead happy lives.”

Twenty five of the seventy-five visceral and extraordinarily memorable drawings that she completed over a period of three-and-a-half years between 2011 and 2014 are now on view at The Drawing Center.

Natalie Frank: The Brothers Grimm I The Drawing Center. Through June 28.