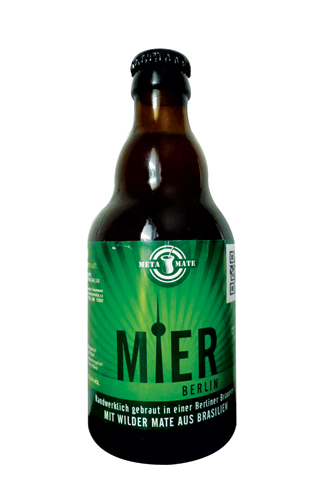 In the same vein as FreeBeer and OpenCola, Mier is an open source beverage, which means that the recipe is available over the internet and anyone can brew and even sell their own in-house version, such as the (less tasty) Belgium-brewed Mier 7.0.

Created last December by the gang at Pirate Party hangout Meta Mate Bar in Prenzlauer Berg, Mier is currently in its ninth incarnation, Mier 9.0. Scan the QR code on the neon green Mier label to give feedback and suggestions to the bar, adding a new spin to the idea of ‘liquid democracy’.

While Mier seems expensive (€1.50-2.50, 0.3cl), the costs cover the small-batch production (600 litres) and the Brazil-harvested mate. Buy Mier at the ‘source’ – the Meta Mate Bar – or head to Mier’s website, where you can order a bottle or locate alternative sales points, such as Mitte hacker club c-base. When you’ve finished tinkering with your Mier recipe, try Absinth’o’Mate, an open source absinthe with a mate kick to be launched in late October.