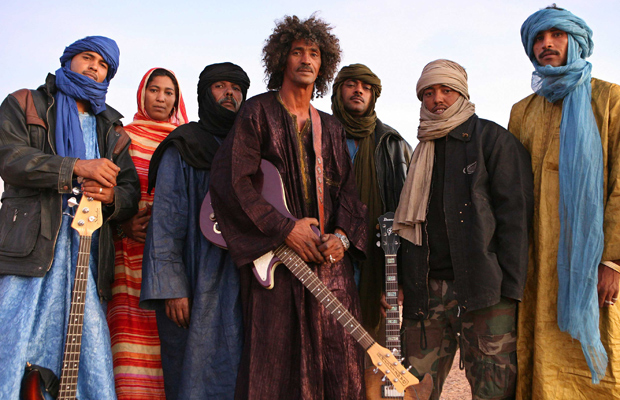 From the remote corners of the Sahara to festival stages around the globe, the poet-guitarists and Tuareg rebels from Northern Mali who formed Tinariwen (“the Deserts”) 32 years ago have since become legends for their handling of guns and guitars with equal determination. After years of exile in neighbouring Libya, where they experienced the hospitality of Gaddafi’s military training camps, they ditched their fatigues to continue the fight with other means: their music, sung in their native Tamashek. Closer than ever to the traditions of their nomadic ancestors, they’ll play Haus der Kulturen der Welt, as part of the Wassermusik Festival on Friday, July 29.

You’re a collective, not a band… what does that mean exactly?

Tinariwen has been around for 30 years, and over the years, different generations of musicians have joined the group. For the Tuareg, music is festive, something you do between friends around a fire. Both friendship and bands start like that.

The birth and development of Tinariwen has gone hand in hand with the fate of the Tuareg people. how important have politics been in your music?

Our songs are not political. Only journalists say that. Our songs are about our people, our life, the desert, nature’s beauty and the difficulty of being a nomadic people nowadays. If you want to call that political, then why not?

If you had to sum up your music in a word, what would it be?

You’re known to have been very active in the 1990s Tuareg uprising and have gone through Libyan training camps. Are you grateful to Gaddafi for his support?

Libya used the despair of Ishumars [the young unemployed] in the 1980s and 1990s. when you are rejected from all regions, you are happy to be welcomed, even if it is not for the right reasons. Today, western countries see their own interests first, exactly like Gaddafi. No one is ever all white or all black.

Looking back 25 years later, how do you see your days as freedom fighters?

Today, we are seeking peace. we don’t regret anything, but weapons didn’t change anything. We are out to continue the fight, but we have found our path in music by touring the whole world. We want to tell about the problems suffered by our people and the desert in which we live.

Do you bear a grudge against the Mali government? Is it possible to forgive and move forward?

The anger will always be present. We just try to live with it. The fight goes on.

Your music has often been described as Tuareg blues. Do you think it’s a good label?

We call our music ‘Assouf’ (melancholia). Melancholia exists in American blues, in Brazilian saudade, in Portuguese fado, in Cape Verdean morna. Wherever there are suffering people, you find this feeling. Or maybe they have been comparing us to blues because we play the guitar?

Two years ago there was a peace deal concluded between the Malian government and the Tuareg community. Has the situation improved since then? How is life in Mali today?

Very hard. There is drought, terrorism, drug trafficking, uranium, oil. There might be peace, but there is still another war, the money war.

We’ve returned back to our ancestral tradition of music between friends beside the fire.

But there is still something very modern about your music.

The modernity comes from the sound, from the production. We have remained the same. We strive to be as pure and as free as possible in our music.

Back then, during the years of exile, people would bring a tape and you would record it on the spot. Is cassette culture still important in Africa?

Yes. Africa has oral tradition. There is no legal music market. Everything is transmitted from ear to mouth, from hand to hand. Of course, the internet and social networks are a real revolution.

What has success and fame brought you?

Nothing. We can just buy ourselves a good 4×4 and feed our families and friends.