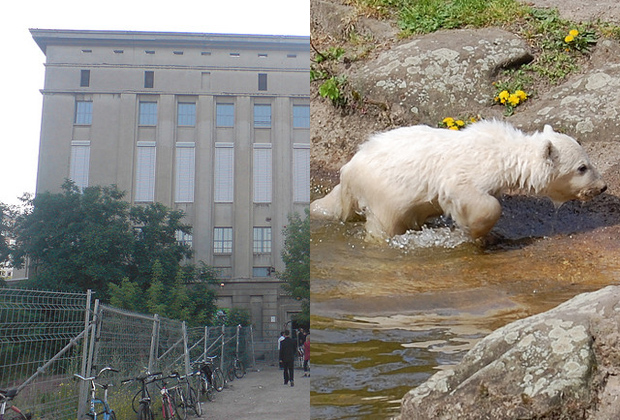 We all loved Knut, but this is getting silly. Apparently, the unseemly tug-of-war over our beloved bear’s remains is not done yet. At first, the Natural History Museum seemed to have won the battle – despite protests from Knut’s fans – and agreed with the Berlin Zoo that he would be stuffed and put on display in the interests of science. If that plan had gone ahead, Knut would’ve shared the fate of Berlin’s other favourite zoo animals – preserved like Bobby the Gorilla.

But now the legendary nightclub Berghain has also made a bid for Knut’s fur – to commemorate him in a more innovative, Berlin-style way.

“This is the 21st century, and this is a New Berlin,” Berghain spokesman Felix Gletscher told EXBERLINER. “We think Knut should be honoured in a way that reflects the vibe of the city. We want to unite two Berlin legends.”

But he didn’t mind admitting there were economic incentives to the plan. “We get a lot of people here, and having Knut would definitely be an extra draw. This way, there will be two famous sights in one place.”

Gletscher told reporters on Thursday that Berghain’s management hadn’t decided for sure what they would do with the fur, if their offer were accepted, “but it would be tasteful and respectful to Knut’s memory.”

He speculated that a separate room at the back of the club might be dedicated to Knut, where his fur would be displayed in an ambient, tranquil environment. “It would be a place where you could take a break from the dance floor, chill out, and maybe write a message to Knut on a special wall or in a book.”

“Obviously, even though we want people to be near Knut, we’ll do all we can to keep the fur safe. We don’t want it abused,” Gletscher added.

It hasn’t taken long for Knut’s fans – a sensitive bunch at the best of times – to express their outrage. This morning’s letters section in the B.Z. was filled with complaints about the plan. “Have they lost their minds? I can’t think of a less appropriate place to put Knut,” wrote Ralf S. “Stuffing him is bad enough, but it would be really sick if they didn’t even keep him in one piece.”

Lisa D. had this to say: “It’s so typical. He was exploited in his life, and now he’ll be exploited in death, too.”

“Maybe we should use Knut’s death as an opportunity for some intelligent reflection on the way consumerism is damaging the polar bear’s natural habitat,” said Kevin P. “And not just stick him up in a nightclub for drunken gay Spaniards to look at.”

Berlin Zoo director Bernhard Blaszkiewitz, who is said to be considering Berghain’s offer, was unimpressed with what he considered sentimental arguments. He called for people to put things into perspective. “I liked Knut as well,” he said in an interview in last weekend’s Frankfurter Allgemeine Sonntagszeitung. “But more than 20,000 people just died in Japan, and there’s a war going on in North Africa.”

But according to inside sources, it’s mainly the financial incentive that makes Berghain’s offer so tempting: although the exact offer amount has been kept secret, it is rumoured to be enough to make up for the lost revenue due to the death of its most cherished attraction. “It would make up for at least five years of Knut-less Zoo,” said a member of the zoo’s management team, on condition of anonymity.

Blaszkiewitz thinks the way Knut had been “humanized” in his lifetime was unhealthy, and he believed giving an animal’s fur to a nightclub would be an innovative way to commemorate him. “I have to admit I’ve never been to Berghain,” he said. “But I think getting the feel of some fur in a darkened room is a good way to get young people interested in biology. We might even send one of our keepers to give some instruction.”

The club said that if they are allowed to buy Knut’s fur, they would also sell Haribo’s limited edition Knut Gummi-bears at their bars, donating the profits to a climate change charity.