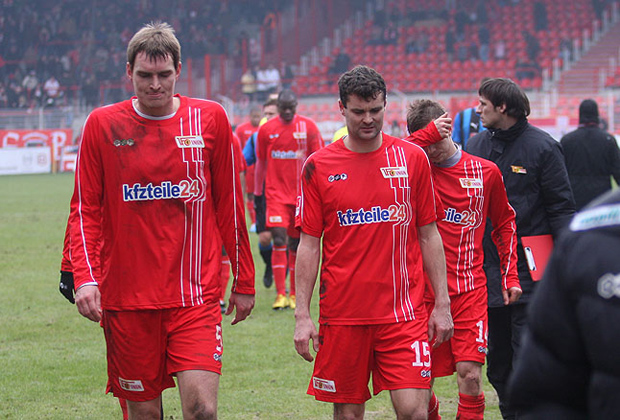 “Tyre tracks all across your back, I can see you’ve had your fun.” Jimi Hendrix’s “Crosstown Traffic”, possibly one of the most heartless and chauvinistic songs ever put to shellac (what a hook, though). He had just run his girlfriend over when he recorded it.

Well, it looked like Union had been running tanks all along their flanks in the preparations for this game. If there was to be any crosstown action coming from the wingers of 1.FC Union or Paderborn, then they were going to have to do it the hard way. The side of the pitch next to the seated stand at the Alte Försterei had more track marks on it than Sid Vicious’ corpse.

Maybe it was clever, I thought to myself before the game. The worry was that Christoph Menz would not be fit and a replacement right back would have to be found somewhere. One might as well make the opposition wingers job as hard as possible if they were going to get anything out of this game.

In the first half, that side of the pitch was as empty as the bar at Mecca. Paul Thomik was nowhere to be seen, all of Union’s play in the opening twenty minutes was down their left, with Michael Parensen behind Chinedu Ede. Paderborn stuck to the middle and to the right. Union started off well, in a scrappy affair, or at least as badly as Paderborn, but it quickly became the old story of the season. Union made chances, but couldn’t score, and didn’t pass the ball very well all the time. It was a fight and they got bruised. Simple.

The last two games between the sides in Berlin had seen 14 goals. Union scoring eight. But nothing would go in. Ede, who ran all day, missed the chance of the season with a free header just before half time, Mattuschka and Savran (who both made themselves excellent chances as well) got in each others way in the six yard box and Mosquera kept turning back on himself.

Thirty-six crosses to Paderborn’s 15 tells its own story when you consider that Paderborn scored with two headers and Union none. For Rolf-Christel Guie-Mien it was “like Christmas and Easter coming at the same time“ to score with his head according to his manager.

For 10 minutes at the start of the second half it looked Björn Brunnemann might drag the game out of it’s torpor by the scruff of its neck. Union played desperately to get back into it, but the second goal was a killer. Brunnemann and Ede having switched flanks, a space opened up like the red sea on the left suddenly, and it was a festively grateful Guie-Miens alone heading past Marcel Höttecke.

For all the technical mistakes made on the pitch, you can’t fault Uwe Neuhaus’ commitment to attacking at home. By the end, they had Kolk, Mosquera, Benyamina, Brunnemann and Ede up top as Mattuschka went back to try and stifle any breaks, but it was mercilessly hard out there by this point. Heads had dropped like so many old sweet wrappers.

Today I have already tried, out of a misguided sense of national comradeship, to defend Steve McLaren as he responded to being 3-0 down to Dortmund by not even contemplating to play with two strikers. McLaren is a loser and should be fired.

Neuhaus couldn’t have thrown more at Paderborn, but it was the simple things that went missing, like at Fürth. The distribution fell apart going forwards whilst the defending was, at times, shocking. Sören Brandy was left alone to head in the opener from a corner despite being surrounded by red shirts.

Karlsruhe losing to a post-Cup hungover Cottbus helped nobody. Now Union have to go away. To Hertha. To win, or they are stuck in a dogfight. Dominic Peitz gets more vital, and looks better, every game he misses. To lose Michael Parensen a third time in a year or so would be massive. The advantages of a fit Brunnemann and Kolk will help. Players that can run at a team through the midfield. Scamperers who are happy to get stuck in with their elbows. They will need a bit of that against the slick looking Hertha, and they need to forget this result like Jimi forgot to press the brakes that day.