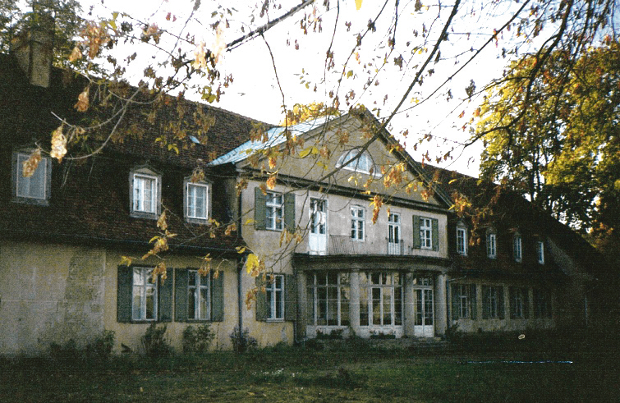 Before the Potsdam villa owned by Berlin’s most famous Jewish family was restored to its former grandeur, it was a rundown den of iniquity for hippy students. Robert Rigney meets an heir and recalls the good old days.

It was a sunny day this past June when I saw him bicycling towards me. His hair had gone completely white by now, but I recognised him instantly. Yes, it was Matthias Schieckel, one of the last remaining heirs of the famous Mendelssohn-Bartholdy family. His German-Jewish forebears had thrived in pre-WWII Berlin as Europe’s most influential bankers, and counted among their celebrated ancestry the philosopher Moses Mendelssohn and his grandson, composer Felix Mendelssohn Bartholdy.

Schieckel was out running errands in Wilmersdorf. I stopped him on the bike path in front of Edeka on Berliner Straße and asked him if he remembered me. He was cagey at first, wasn’t quite sure what I was after, thought I might be some kind of trickster or charlatan and spoke French to throw me off, but he eventually came round and remembered me, vaguely. We had last seen each other some 15 years ago, when he was renting out rooms in his spectacular Potsdam mansion on Jungfernsee, a stone’s throw from the site of the post-War Potsdam conferences. Back then Schieckel was a Berlin taxi driver who had suddenly been saddled with the task of presiding over a rambling, palatial country house designed by one of the leading architects of the day. The house – which had fallen into ruin over the years – had been appropriated from his celebrated family as part of the Nazis’ Aryanization program in the 1930s and served as a Nazi ministry during the war and a dorm for athletes in GDR times.

In the summer the students would put on extravagant parties, with the Rococo-frescoed ballroom strung with camo netting taken from abandoned Russian barracks.

Under Schieckel’s management in the late 1990s, the old mansion became a cheap crash pad for ne’er-do-well students from the University of Potsdam – including my brother, who was sharing a room with four classmates for DM 100 per month. I’d come up for the weekend from Prague, where I was living, and stay in the house, which had neither hot water, heat nor telephone. The villa was freezing cold in the winter, but in the summer the students would put on extravagant parties, with DJs in the coal cellar and the Rococo-frescoed ballroom strung with camo netting taken from abandoned Russian barracks in the neighbourhood.

Nowadays the Nauener Vorstadt neighborhood, where the mansion is situated, is a posh, upscale millionaires’ quarter on the leafy fringes of Potsdam, home to such celebrities as fashion designer Wolfgang Joop and talkshow host Günther Jauch. But back in those heady post-communist years it was in ruins, full of crumbling, leprous, Charles Addams-esque mansions mouldering away behind rusty gates in overgrown gardens on streets that bore busts of Lenin and Karl Marx. Potsdam stank. Literally. Yellow plumes of coal smoke poured from chimneys and it was no wonder that squatters had taken over many of the abandoned villas, whose real ownership hadn’t yet been sorted out.

This wasn’t the case with the Mendelssohn Bartholdy villa. At those summer parties, Schieckel would be there, his white taxi parked on the lawn. He stood aloof and a bit wary off to the side, just making sure the students weren’t about to burn his house down.

The Mendelssohn Bartholdy villa dates back to Schieckel’s grandfather Otto von Mendelssohn Bartholdy (1868-1949), a successful Berlin banker who wanted to escape the hurly-burly of Gründerzeit Berlin. He ended up here on Bertinistraße on the shores of the Jungfernsee with his wife, scouting out potential sites for a house.

“And so they looked around and they saw a little house with a hedge in front of it,” says Schieckel. “And they were speaking to each other: ‘Oh, this could be very nice for us.’ And a hat popped up from behind the hedge. It was the gardener. ‘You can have it,’ he said. So they bought it. They had children – including my mother – and servants. The house grew, and so did the family.”

And then came the Nazis. Otto von Mendelssohn Bartholdy, who was three-fourths Jewish, was protected from the Gestapo by his wife Cecile, who was a quarter Jewish. However, they lost the house, which was turned into a shipping office, while the family was forced to live in the nearby servants’ quarters.

At the end of the war, it seemed as though the family would get the house back. But then came the Potsdam Conference in the nearby Cecilienhof, which resulted in the entire quarter being evacuated for six weeks, at the end of which the Russians decided to keep the Mendelssohn Bartholdy manor.

“Otto was very angry,” Schieckel says. “He took the keys and threw them on the table at the Russians.” He moved to Basel, Switzerland and died there two and a half years later, in 1949. Ultimately, the house was turned into a dormitory for students from Potsdam’s Academy of Sports.

Schieckel’s mother Vera was born in the house, and lived there until the Nazis requisitioned it. In the 1950s on a tip, she was advised to leave Russian-administered Potsdam and settle in the American sector of Berlin, in a modest house in Dahlem. Not long afterward, Matthias was born.

After the fall of the Berlin Wall, the Schieckels were restituted the house with the help of a local lawyer and villa owner. Their idea was to sell the house as soon as possible. Various individuals, including Joop, considered buying it, but balked due to the high renovation costs. And so Schieckel decided to rent to students, who relished the romance of living like a down-at-the-heels Schlossherr.

The students as I remember them were mainly a scruffy lot, long-haired, hippy types with earrings, cut-off jeans and sandals. There was Gönner, who wanted to be a landscape architect, and Knut, who was studying renovation. There was Ingo, who’d travelled to Nepal seeking enlightenment, carried the Bahagavad Gita with him wherever he went and was always humming, tapping out rhythms on the walls and the furniture.

All of them were from the former East. All of them hated Berlin, found the people cold and unfriendly. They were a close-knit group, did everything communally, stayed aloof from Matthias and his Wessi friends and felt that they belonged to a secret brotherhood. They even had their own coat of arms in the kitchen.

The students, in turn, amused Schieckel, who called them decadent, like everyone from their generation. The way they didn’t think about the future and just wanted to have fun. Schieckel’s own generation was different, he said. It was the time of the Wirtschaftswunder, when everyone worked like hell. “I am a bit Prussian,” said Schieckel. “I grew up valuing law and order.”

These little critiques were funny coming from a 50-year-old slacker who apparently had no greater ambition than to drive a cab. “To hell with being engaged in politics,” he’d say. “Fascists, communists, Chaoten. It’s all the same. They all fight to have the world a certain way, and it never turns out the way they want it. That’s why I think the youth of today, with their hedonism, is better, more practical. They accept the world the way it is, and I admire that.”

At around three in the morning at one of the student parties, the last DJ would have thrown in the towel and the cellar would be abandoned. There would be pockets of people scattered around the various rooms, engaged in deep, soulful and confessional conversations: a Berkeley student in the kitchen lecturing someone on Buddenbrooks, someone from Vassar talking about the story she wanted to write about the house for The New Yorker. Someone would be passed out on the ping pong table. Tired and covered in soot, we’d sit round the candlelit table in the Wintergarten, trying to name all the palaces, castles and chateaux in and around Potsdam, and arguing over whether such-and-such was a castle or a folly. At five in the morning, after most of the guests had left, we would take magic mushrooms and explore the mist-shrouded Neuer Garten.

That was all years ago. The students were finally kicked out of the house, and Schieckel’s mother and her sister sold the villa for €1.2 million, part to his nephew and part to family friends. A TV crew recently came round and made a documentary segment on the house, which now boasts polished parquet floors and white wainscoting, antique furniture and billowing white curtains. The Nauener Vorstadt is free of punks and squatters, now that the millionaires are back. Vera Schieckel is 94, and she appears regularly on TV shows, recalling the way it was in the 1930s.

As for Matthias, he is 70 now, has stopped taxi driving and lives with his 40-year old wife in an Altbau apartment in Wilmersdorf. Sitting in his living room filled with antiques and old pictures on the walls, he suddenly changes the subject from the the grand history witnessed by the Medelssohn-Bartholdy villa in Potsdam to the mundane realities of day to day life in Berlin. Tonight he has a guest from England – the daughter of Otto von Mendelssohn’s maid, who is in Berlin for a jaunt – and the subject is how many kilos of asparagus to buy for tonight’s dinner.