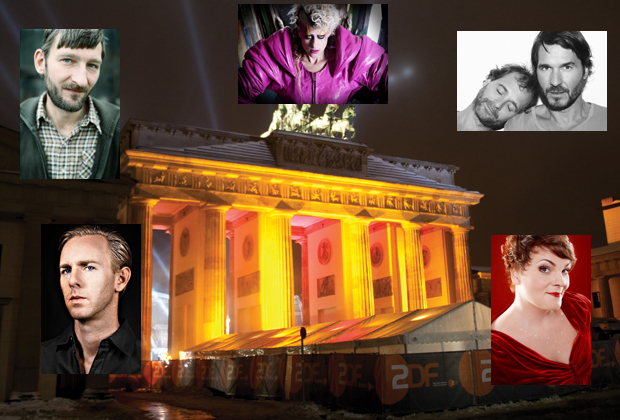 For a city in which nothing ever really changes, Berlin remains the New Year’s capital of the world. Let’s pick up our party chopsticks and dig in: For the patriotic amongst you, The National Fanfare of Kadebostany marches at Ritter Butzke along with the live Feindrehstar, while Magnet salutes the indie nation with a Karrera Klub-led Silvester pop explosion. Suicide Circus circulates local techno heroes such as Shitkatapult’s DJ Flush and Exquisite’s Michael Placke, while Tresor goes Drumcode with Cari Lekebusch and Joel Mull, with Detroiters, spaceman Mike Huckaby and Octave One in their Globus, among others. Yaam and Calabash Club team up via shuttle bus for a night of soca and dancehall, including Barney Millah, Berlin’s busiest. From Yaam we go Ya Ya at Bassy with Les Kitschenettes. The entire Volksbühne complex is offering “Hollywood Glamour” and a buffet, which is a far cry from the Throbbing Gristle of a few years ago. For more goofy glamour, Denglish darling Gayle Tufts cabs it up in Tipi. Kompakt Kollaborator and Whirlpool Whazzit Justus Köhncke spins at Südblock, while the hypnotizing Oliver Koletzki Feat. Fran and his Stil vor Talent crew alter Astra. And even more techno at Umspannwerk with Aka Aka, Cinthie, Turmspringer. Watergate’s family affair brings in house brothers Tiefschwarz. While the deep black duo won’t render a duet of “Auld Lang Syne”, they will keep you swimming in uninhibited dance moves. Despite a flood of neon and glitter, sparkles are not the star of Flamingo’s New Years night, instead provocative ladies Anika and Planningtorock take their antics to the stage. The less than holy Peaches won’t encourage you to keep your 2012 resolutions but her Superstar-dom is capable of removing your pants and keeping your jaw uncomfortably dropped. The three-story Weekend offers radical Silvester night views and the chance of a rooftop firework show! A night of M-Nus DJs including Ambivalent and Matt John, main draw comes from the updated, upgraded Richie Hawtin who performs his latest, Plastikman techno beats. Champagne smashing to the works of Glenn Miller, Stevie Wonder and Louis Armstrong, now that is how to ring in the New Year with class! Swinging Brass channels virtuosity and groove in the most picturesque music house: Berlin Konzerthaus. You may be in the dark for 72 hours and you may collapse from exhaustion and lack of food but with a feast of musical acts, including Get Physical dynamo Tim Green and constant hit maker Oliver $, Prince Charles’ three-day party will keep you tastefully satisfied. Good-bye 2011, Good-bye ADS! The closing party for the club and the year features live acts Unami and Andy Kohlmann. Headlining another club funeral / New Years night is Boysnoize Records’ D.I.M. The night boasts insane nu-rave and techno and with a resurrection of the action to Gretchen, Icon may have a few un-dead visitors. And… and… and… it’s time to go home.