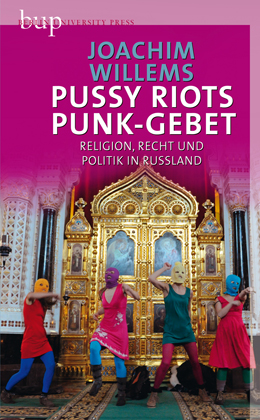 Humboldt University’s Religious Studies professor Joachim Willems wrote the book on Pussy Riot, or at least their interaction with the Russian Church.

Everyone knows about Pussy Riot, their “Punk Prayer” in an Orthodox church and the ensuing trial and imprisonment. But few understand the interaction between the Russian Church and Putin’s politics as well as Humboldt University’s Religious Studies professor Joachim Willems, whose book Pussy Riots Punk-Gebet: Religion, Recht und Politik in Russland came out in August of this year. We asked him three questions before the Pussy Riot support evening at Volksbühne tonight at 8pm. We’re also giving away a copy of his book (in German); see our Facebook page for details.

What was the main idea behind writing a book about Pussy Riot? What did you feel was missing from the discussion?

I was both fascinated and shocked when I first saw the video clip of the “Punk Prayer” in the Cathedral of Christ the Saviour in Moscow. It is a rude insult to at least most of the Orthodox Christians to perform not only this kind of song in a church building, but any kind of music that is not part of the Orthodox liturgy, the divine service. Pussy Riot decided to enter the sanctuary in front of the iconostasis, the wall of icons. Normally, only the clergy may enter this part of the church building. But I also realized that these women had a serious concern. So I wrote my book because I tried to understand these women and the immense and heavy reaction both in Russia and in the world.

Was the performance in the church transgressive as well as political?

Certainly, the performance was transgressive. As a theologian, I ask myself, to what extent it is religiously acceptable to violate religious rules? In which cases must one accept the feelings of believers – and when might it even be important to offend these feelings?

There are a lot of anarchic moments in the history of religions, when believers rejected limitations of freedom for religious reasons, even if these limitations were justified by religious authorities: in Zurich in the 16th century, some reformers celebrated a meal with sausages during Lent, and in his Treatise on Christian Liberty, Martin Luther declared: “A Christian is a perfectly free lord of all, subject to none.” (Of course, he added: “A Christian is a perfectly dutiful servant of all, subject to all.”)

How strong is the current influence of the Orthodox Church on society and politics in Russia today?

The Russian Orthodox Church is still aware of what can happen to the church, when it comes under state control, either in the Tsarist Empire, or in the Soviet Union. But the church nevertheless becomes more and more influential in Russia under Putin. This is a matter of course, because three-fourths of the Russians identify themselves with Orthodoxy. For many of them Orthodoxy is an important element of their national identity.

So, Putin wants to participate in the positive image of Orthodoxy. He tries to use it to create a new state ideology, to establish an ideological border between Russia and the West, and to strengthen his leadership. In return, church representatives support Putin and get influence on the political agenda, even without formal power: the church, for instance, condemns homosexual relations, and corresponding laws are passed.