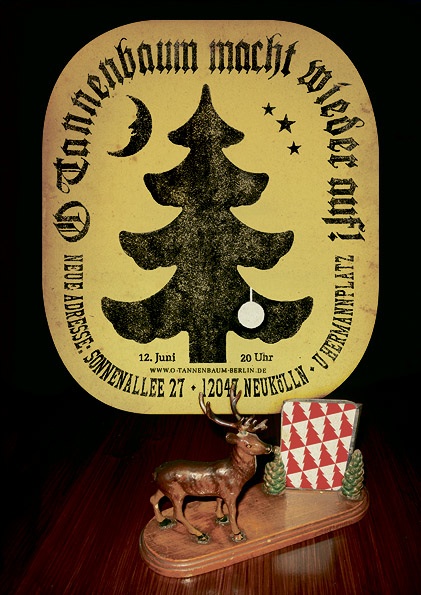 YOUR WEEKEND: It’s no secret that a schism through Berlin nightlife has built up over the last year. On one hand, a recently-arriving moneyed and aristo class is mixing with the increasingly aspirational, well-established dirt-glamour crowd, with parties speckled around Mitte at Amano Bar, Soho House, Ressort, King Size, et al. And then you have the usual young generation of penurious artists, self-exiled to Neukölln, preferring bars and “events” at Forgotten Bar, Minibar, the recently cop-shuttered Raum 18, and so on. Oh, and there’s everyone else in between, which doesn’t make for a very tidy blog post.

These poles shall soon be sparkling with stripper perspiration. After about a year’s worth of downtime, during which its Scandi owners/curators transformed themselves in popular outsider DJs, freak-flag homestead O Tannenbaum reopens (Sat, June 12 @ O Tannenbaum) as a full-time bar, project and film space. More importantly for the poor, there will be free Indonesian food, as well as a live performance by MISS HAWAII and a “lecture about everything” by SANDER KALVERDA, though I would think that the desire not to know everything is one of the reasons we embrace decadence in the first place.

And, this being Biennale weekend, that decadence will be embraced in spades, which will then be used by the peasants to bury them. I’ve been tracking the incremental climb and/or decline by the rebellious children of money from a lifestyle that parodies their parents’ privilege into one that embraces it, and I suspect that this weekend’s fancy-dress summer ball at the Crown Prince’s Palace (Fri, June 11 @ Kronprinzenpalais Garten) may maintain a paradigm shift city-wide similar to Truman Capote’s Black and White Ball. Or it could just be a night of dancing and watching football. THE CAPITAL DANCE ORCHESTRA will be providing the German Forties nostalgia (fun times!) while LISA BASSENGE sings and the Grill Royal folk grill for an audience intent upon consuming appetite suppressants. Afterward, as often occurs at Coop parties, FILIPPO MOSCATELLO DJs a disco reverie. Your parents would understand, and they’ll buy you a Porsche when you’re willing to listen.

As for those semi-oldtimers that exist between the above described polarities, some Berlin favorites will be up at Stattbad for the second installment of La Jeunesse Doree (Fri, June 11 @ Stattbad Wedding), including RAZ OHARA and TOK TOK (divorced from Soffy O) both performing live, as well as a dozen more acts (such as RAY OMEGA, celebrating his record release), and DJs, fashion, art and anything else to camouflage the fact that you’re at a party. I pity the poor collector forced to trudge through one Biennale video after another indicting his social position all while waiting for the fun to begin and for the phone call from his buyer informing him that that work by that Maoist he bought last year has increased 14 percent in value. I’m glad that something has.